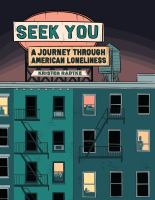 Seek you A journey through American loneliness

"When Kristen Radtke was in her twenties, she learned that, as her father was growing up, he would crawl onto his roof in rural Wisconsin and send signals out on his ham radio. Those CQ calls were his attempt to reach somebody--anybody--who would respond. In Seek You, Radtke uses this image as her jumping off point into a piercing exploration of loneliness and the ways in which we attempt to feel closer to one another. She looks at the very real current crisis of loneliness through the lens...es of gender, violence, technology, and art. Ranging from the invention of the laugh-track to Instagram to Harry Harlow's experiments in which infant monkeys were given inanimate surrogate mothers, Radtke uncovers all she can about how we engage with friends, family, and strangers alike, and what happens--to us and to them--when we disengage."--

Bookmobile Nonfiction Show me where