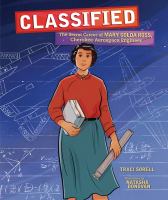 "Mary Golda Ross designed classified projects for Lockheed Air Corporation as the company's first female engineer. Find out how her passion for math and the Cherokee values she was raised with shaped her life and work"--

Mary Golda Ross, born to Cherokee Nation–citizen parents, always excelled at math. Graduating from high school at 16 and college at 20, she became a math and science teacher. When WWII began, she was hired by Lockheed Aircraft, where she worked with engineers correcting a design flaw in P-381 fighter planes. Later, she was chosen as the only female in Lockheed's Skunk Works group (a top-secret program whose efforts are still mostly classified), designing spacecraft for NASA. Sorell's (Indian No More, 2019) succinct text emphasizes Ross' reliance on Cherokee values (gaining skills, working cooperatively, remaining humble, and ensuring equal opportunity for all), which played a defining role in her successes and influenced the mentoring work she chose in her retirement. Donovan's illustrations employ rich earth-tone colors and bold outlines, and often incorporate sequential storytelling techniques, enabling multiple scenes to appear in one spread. Appended with a time line, author's note, and resources, this biography makes a valuable addition to units on Indigenous individuals or women in STEM. Grades 2-5. Copyright 2021 Booklist Reviews.

Gr 2–5—Mary Golda Ross (1908–2008), a member of the Cherokee Nation, excelled in math from an early age. Although teenage girls "weren't expected to enjoy or excel in math or science," Ross began attending college at the age of 16 and became a high school teacher after graduation. Embracing Cherokee values, she encouraged her students, especially young Pueblo and Navajo girls, to take advantage of available educational opportunities. In 1942 she took a job at Lockheed Aircraft Company as a mathematical research assistant. In 1950 she became their first female engineer. The company recognized her potential and assigned her to work on top-secret projects related to government space and weapons programs. Donovan, who is Métis, uses elegant cartoon-style illustrations, which are well-matched to the narrative. The artwork helps expand the information included in the text. Using pencil, ink, and Procreate, the layered spreads feature reproductions of blueprints and fragments of notes about Ross's projects. Sorrell, an enrolled citizen of the Cherokee Nation, shares her personal perspective about Ross in an author's note. A time line, bibliography, section of "Four Cherokee Values," and source notes are included. VERDICT This title spotlights the story of an innovative Cherokee aerospace engineer, whose life sets an inspiring example for all children. Pair it with the picture book version of Margot Lee Shetterly's Hidden Figures.—Lucinda Snyder Whitehurst, St. Christopher's Sch., Richmond, VA Copyright 2021 School Library Journal.

"Mary Golda Ross designed classified projects for Lockheed Aircraft Corporation as the company's first female engineer. Find out how her passion for math and the Cherokee values she was raised with shaped her life and work"--