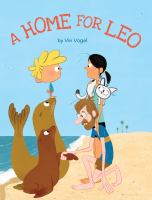 A home for Leo

Leo grew up in the sea with a family of sea lions he loves. When he's reunited with his human parents, he finds he loves them, too.

With a bit of quirky charm, this tale follows young Leo, who has two families, one human, and the other . . . sea lions. The book opens somewhat inauspiciously with baby Leo washed overboard while at sea with his parents, but he's eventually rescued and affectionately raised by sea lions. He notices he's different (apart from his general appearance, he's not great at holding his breath underwater), but he still loves his sea-lion family. Then one day he meets a young girl—she says "Hi"; he says "Ark! Ark!"— which ultimately leads to a happy reunion with his human parents. Of course, he still misses his seal-lion family, but, thanks to a cheerful resolution, it's possible to enjoy being with both after all. The straightforward, brief narrative gets boosted by animated, colorful bold artwork, which boasts a nice balance of droll touches (bare-bottomed Leo frolicking with sea creatures) and poignant ones (the toy seal Leo carries everywhere in the human world). An entertaining story with an underlying message of finding acceptance and family. Grades K-3. Copyright 2018 Booklist Reviews.

PreS-Gr 2—Leo, just a babe in arms, becomes lost at sea. Cold and alone, the human boy is adopted by sea lions. As he grows, Leo adorably compares his body parts to other marine creatures and realizes that he is different. Though he is happy and loved, he also feels "like an empty shell" at times. One day he meets a new creature, a little girl playing on the beach. He says hello to her with a loud, "ARK! ARK!" He compares his body parts to hers and they match. The girl's surprised parents notice the lost boy. After becoming a media sensation, Leo is reunited with his parents and the family cat. Leo is happy, though adjusting to being a kid on land is difficult. Other kids don't act like sea lions. He misses the ocean and his adoptive family. His parents try to help, but Leo still feels empty. Finally, his parents move to a new home by the sea where Leo can live with both his sea lion family and his human one. Leo's tale is told with limited prose, relying heavily on the digital illustrations to convey the story. Readers will enjoy this method of visual storytelling, as bright colored images and careful use of white space separate elements of the story perfectly. The inclusive cast of human characters have large, round eyes full of cartoon charm which complements the endearing humor. Leo's story will resonate with anyone who has ever felt a bit out of place in the world and will reassure that life will be just fine. VERDICT A fine addition to picture book collections.—Mindy Hiatt, Salt Lake County Library Services Copyright 2018 School Library Journal.

Leo grew up in the sea. He has a family of sea lions he loves. He’s happy, but he has always known he was different. Then Leo’s suddenly reunited with his human parents, and he finds he loves them too. But he still feels like a fish out of water. Being from two worlds and having two families isn’t so easy. Leo has a lot to figure out…Splashed with humor and grounded in heart, this brightly illustrated story explores ideas of family, home, and belonging in a way that’s as relatable as it is unique.