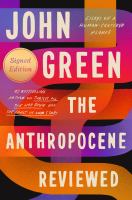 The Anthropocene reviewed Essays on a human-centered planet

"The Anthropocene is the current geological age, in which human activity has profoundly shaped the planet and its biodiversity. In this remarkable symphony of essays adapted and expanded from his groundbreaking podcast, John Green reviews different facets of the human-centered planet-from the QWERTY keyboard and Staphylococcus aureus to the Taco Bell breakfast menu-on a five-star scale. John Green's gift for storytelling shines throughout this artfully curated collection that includes ...both beloved essays and all-new pieces exclusive to the book"--

The Anthropocene, according to the National Geographic Society, is "an unofficial unit of geologic time, used to describe the most recent period in Earth's history when human activity started to have a significant impact on the planet's climate and ecosystems." Significant is putting it mildly. Environmentalists might say catastrophic, even apocalyptic. John Green, an award magnet for his six beloved, best-selling young adult novels, including Turtles All the Way Down (2017), channeled his curiosity about disparate aspects of our lives on our human-centered planet into a podcast, The Anthropocene Reviewed, the foundation for this essay collection, his first nonfiction book and first book for adults, though YAs will avidly read and revel in it, too.Why reviewed? Green explains that his fascination with reviewing stems from his time working at Booklist, where he "became fascinated by the format" of our succinct reviews, which we call the haiku of book reviewing. Wryly contrasting the challenges of writing concise yet nuanced reviews with the ubiquitous, rather questionable five-star scale used to rate everything from restaurants to doctors, he thought, why not review the world? When is a Booklist Review of the Day not exactly a review? When the Booklist editor writing it worked with Green during his time on staff. So this is reportorial, not evaluative. I can state, therefore, that Green combines stories from his life, including a distressing number involving his suffering through such wretched ailments as labyrinthitis, viral meningitis, and depression, as well as tales of being enthralled, as a boy bullied at school, by scratch ‘n sniff stickers, then a bit later, the CompuServe Teen Forum. Green delves into the impact of the months he spent at age 22 as a student chaplain at a children's hospital. That experience turned him away from his intended path to a life as a minister, but there is something of the sermon in his essays as he mixes curiosity and erudition with confession, compassion, and wit, searching for illuminating life lessons amid life's dark chaos. His particular mix of irony and sincerity enables him to embrace both the sublime and the ridiculous.Green's reflections on the COVID-19 pandemic include an inquiry into historic pandemics as well as his tracing of the life of the song "You'll Never Walk Alone" from Rodgers and Hammerstein's Carousel, as it was taken up by fans of the Liverpool Football Club (Green is a soccer devotee), then sung by British paramedics to encourage coworkers in the intensive care unit. Green fits a remarkable amount of facts, observations, and feelings into his tightly constructed essays as he ponders an array of subjects, from The Great Gatsby to the Lascaux cave paintings, air-conditioning and climate change, teddy bears, rivers, and Indianapolis, and shares indelible moments with his parents, his friends, and his wife and their two children. And each essay concludes with a five-star-scale rating. One star for plague. Piggly Wiggly gets two and a half stars. What merits five stars? The movie Harvey (there's a Booklist story behind that). Sycamore trees. When a book receives a "starred" review in Booklist, one star says it all. This is not a review. But if it were, it would carry the Booklist star. Copyright 2021 Booklist Reviews.

YA novelist Green (Turtles All the Way Down) makes his adult debut with this perfectly calibrated collection that reviews and rates various aspects of the current epoch. Taking on the style of a Yelp review, Green assigns a five-star rating to each topic he covers. "Our Capacity for Wonder," for example, gets three and a half stars (due to humans' general lack of attentiveness), while Diet Dr. Pepper gets four—Green loves the drink, but finds consuming it feels like "committing a sin." His review of the video game Mario Kart gives way to a discussion of privilege and a consideration of the role videos games played in the male friendships of his youth: "We didn't need to talk about Mario Kart, but we needed Mario Kart to have an excuse to be together," while CNN gets two stars for its failure to report "background information that allows us to understand why the news is happening." Each short review is rich with meaning and filled with surprises—"Sunsets," for example, draws on several poems to ask "what should we do about the clichéd beauty" of a setting sun— and together, they amount to a resonant paean to hard-won hope. Green's legions of fans will be delighted. (May) Copyright 2021 Publishers Weekly.

"The Anthropocene is the current geological age, in which human activity has profoundly shaped the planet and its biodiversity. In this remarkable symphony of essays adapted and expanded from his groundbreaking podcast, John Green reviews different facets of the human-centered planet - from the QWERTY keyboard and Staphylococcus aureus to the Taco Bell breakfast menu - on a five-star scale. John Green's gift for storytelling shines throughout this artfully curated collection that includes both beloved essays and all-new pieces exclusive to the book."--

Goodreads Choice winner for Nonfiction 2021 and instant #1 bestseller! A deeply moving collection of personal essays from John Green, the author of The Fault in Our Stars and Turtles All the Way Down.“The perfect book for right now.” –People“The Anthropocene Reviewed is essential to the human conversation.” –Library Journal, starred reviewThe Anthropocene is the current geologic age, in which humans have profoundly reshaped the planet and its biodiversity. In this remarkable symphony of essays adapted and expanded from his groundbreaking podcast, bestselling author John Green reviews different facets of the human-centered planet on a five-star scale—from the QWERTY keyboard and sunsets to Canada geese and Penguins of Madagascar.Funny, complex, and rich with detail, the reviews chart the contradictions of contemporary humanity. As a species, we are both far too powerful and not nearly powerful enough, a paradox that came into sharp focus as we faced a global pandemic that both separated us and bound us together.John Green’s gift for storytelling shines throughout this masterful collection. The Anthropocene Reviewed is a open-hearted exploration of the paths we forge and an unironic celebration of falling in love with the world.This is a signed edition.