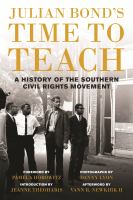 "Compiled from his original lecture notes, Julian Bond's Time to Teach brings his invaluable teachings to a new generation of readers and provides a necessary toolkit for today's activists in the era of Black Lives Matter."--

*Starred Review* Civil rights icon Bond (1940–2015) was an activist, author, chairman of the NAACP, Georgia state representative and senator, and sought-after university professor. Hundreds of students from a number of universities (Harvard, Drexel, Virginia, Pennsylvania, and American University) took his courses on the history of the civil rights movement. This book is a compilation of his lectures, reconstructed from his notes, framed within political and social context, and personalized by first-hand anecdotes. His meticulously documented accounts provide day-by-day replays of monumental events, enlivened by contemporary media coverage, interviews, police reports, and even jail-cell chatter. He dispels easy categorizations (such as contrasting Booker T. Washington to W. E. B. Du Bois, or pitting Martin Luther King, Jr., against Malcolm X), and consistently emphasizes the crucial contributions made by women. Later chapters unfold chronologically, paralleling Bond's growing political influence. It's easy to understand why these courses would have been popular. His lectures are accessible, comprehensive, and compelling, and Bond, who once hosted Saturday Night Live, and who appeared in a couple of commercial films, was a charismatic presence. This authoritative testimony is bound to become a staple of American civil rights literature. Copyright 2020 Booklist Reviews.

As a founding member of the Student Nonviolent Coordinating Committee (SNCC); as a member of the Georgia state legislature from 1967 to 1987; and as chairman of the NAACP (1998- 2010), Bond (1940–2015) lived the struggle to achieve democracy in 20th-century America and beyond. Along with being a participant and insider, he was also a student and teacher of social movements in general and the civil rights movement in particular. This compilation of his original lecture notes is filled with detail, insight, and synopsis. The graceful narrative lays out pointers for effective mobilization as it explains what happened and who made it happen at pivotal times in the 1950s and 1960s' nationalization of the civil rights movement that transcended traditional legal approaches to take the battle from courtrooms to the streets. Included are photographs by Danny Lyon and an afterword by Vann R. Newkirk II. VERDICT Mixing reminiscence and analysis of the long struggle against white supremacy, Bond's lessons provide general readers and scholars alike penetrating studies of ideals, motivations, compromises, suffering, and sacrifice that won Blacks' release from the worst of racist Southern pathology. Essential reading.—Thomas J. Davis, Arizona State Univ., Tempe Copyright 2020 Library Journal.

This revelatory collection of classroom lectures by UVA history professor and Georgia state senator Bond (1940–2015) shines a spotlight on lesser-known aspects of the civil rights movement. Expertly edited by Horowitz, Bond's wife, and Brooklyn College political science professor Theoharis (A More Beautiful and Terrible History), his former teaching assistant, the pieces challenge the "master narrative" of the movement: "Rosa sat down, Martin stood up, then the white folks saw the light and saved the day." Bond details how thousands of young, poor, and working-class protestors applied the pressure that led to school integration and the 1964 Civil Rights Act and 1965 Voting Rights Act, among other milestones, and notes that liberal white politicians, including John and Robert Kennedy, resisted the movement in its earliest days. Bond also pays tribute to numerous grassroots leaders, many of them women; reveals affinities between the civil rights, Black Power, and antiapartheid movements; and details disagreements between SNCC, the NAACP, and other civil rights organizations. Elegant photos by SNCC photographer Danny Lyon and an extensive bibliography compiled by Bond complement the eye-opening history. The result is a worthy contribution to the historical record and an inspirational guide for today's social justice activists. (Jan.) Copyright 2020 Publishers Weekly.

The SNCC co-founder and civil rights professor draws on original lecture notes to explain the role of youth activism in key historical events, the unpopular and high-risk realities of disruptive movements and what today’s activists need to know. Illustrations.

"Compiled from his original lecture notes, Julian Bond's Time to Teach brings his invaluable teachings to a new generation of readers and provides a necessary toolkit for today's activists in the era of Black Lives Matter"--

A masterclass in the civil rights movement from one of the legendary activists who led it.Compiled from his original lecture notes, Julian Bond’s Time to Teach brings his invaluable teachings to a new generation of readers and provides a necessary toolkit for today’s activists in the era of Black Lives Matter and #MeToo. Julian Bond sought to dismantle the perception of the civil rights movement as a peaceful and respectable protest that quickly garnered widespread support. Through his lectures, Bond detailed the ground-shaking disruption the movement caused, its immense unpopularity at the time, and the bravery of activists (some very young) who chose to disturb order to pursue justice.Beginning with the movement’s origins in the early twentieth century, Bond tackles key events such as the Montgomery bus boycott, the Little Rock Nine, Freedom Rides, sit-ins, Mississippi voter registration, the Sixteenth Street Baptist Church Bombing, the March on Washington, the Civil Rights Act, Freedom Summer, and Selma. He explains the youth activism, community ties, and strategizing required to build strenuous and successful movements. With these firsthand accounts of the civil rights movement and original photos from Danny Lyon, Julian Bond’s Time to Teach makes history come alive.