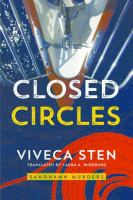 "It's a beautiful day for a regatta - until one of Sandhamn Island's most prestigious residents is killed aboard his sailing yacht. Oscar Juliander was a rich lawyer and deputy chairman of the prestigious Royal Swedish Yacht Club. While at first his death seems like a tragic accident, there is evidence of foul play. Police detective Thomas Andreasson teams up with local lawyer Nora Linde to investigate. As they work to uncover clues, they face resistance from an elite world where ...nothing but appearance matters. When the rich and powerful inhabitants of Sweden's idyllic island getaway come under scrutiny, Thomas and Nora must work closely and secretively to seek justice."--Provided by publisher.