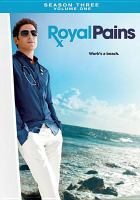 Hank Lawson is a young E.R. doctor who, after being wrongly blamed for a patient's death, moves to the Hamptons and becomes the hot new "concierge doctor" in town. Though Hank is initially reluctant to embrace this new career, with encouragement from Evan and Divya, who volunteers to be his physician assistant, he decides to stay in town for the summer, once again solving medical crises and helping those in need.