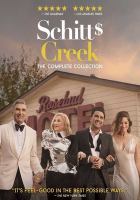 As the previously-rich Roses continue to adjust to rural life, there are still plenty of bumps in the dirt road they're traveling. Even after their dramatic split, Ted eventually hires Alexis as secretary for his vet clinic while Moira runs for city council, de-railing Johnny's plans to do the same and not to open a bagel shop. Although he attempted to run away, David returns to town and reluctantly takes a job at the Blouse Barn, determined to put his own stamp on the trampy retailer.... Ultimately, when forced into a corner, the Roses officially declare to their former friends that they are proud to live in Schitt's Creek.