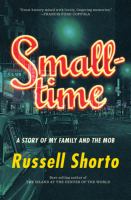 Smalltime A story of my family and the mob

"Family secrets emerge as a best-selling author dives into the history of the mob in small-town America. Johnstown, Pennsylvania, a city "in its brawny postwar prime," is where "Little Joe" Regino and Russ Shorto build a local gambling empire on the earnings of factory workers for whom placing a bet--on a horse or pool game, pinball or "tip seal"--is their best shot at the American dream. Decades later, Russell Shorto grew up knowing that his grandfather was a ...small-town mobster, but never thought to write about him, in keeping with an unspoken family vow of silence. Then a distant cousin prodded him: You gotta write about it. Smalltime, the story of Shorto's search for his namesake, delves into the world of the small-town mob, an intricate web that spanned midcentury America, stitching together cities from Yonkers to Fresno. A riveting immigrant story, Smalltime is also deeply personal, as the author's ailing father, Tony, becomes his partner in piecing together their patriarch's troubled past. Moving, wryly funny, and richly detailed, Smalltime is an irresistible memoir by a masterful writer of historical narrative"--