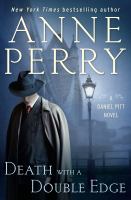 Death with a double edge

*Starred Review* Daniel Pitt returns for his fourth outing (after One Fatal Flaw, 2020), which also features his parents, Thomas and Charlotte Pitt, protagonists of Perry's earlier series named for them. This time the law office where Daniel is striving to make his name is rocked when a longstanding employee is murdered, with Daniel's card found in his coat. Thinking the murder may be related to a case the victim was working on, Pitt and his colleagues at the chambers get to work investigating; soon there's another murder, this time involving a client. As the deaths stack up and WWI looms, violence and intimidation get closer to home, and tension builds to a boiling point. Perry has written a cracking story, with characters, even minor ones, deftly drawn to show nuanced personalities, and with dialogue evoking the atmosphere of prewar London. Readers will be glad to see the return of Daniel's beloved Miriam and will look forward to more adventures with the affable, smart lawyer and his charming circle of friends and relatives. Recommend this to Maisie Dobbs aficionados as well as Perry fans. Copyright 2021 Booklist Reviews.

Haines's Independent Bones features PI Sarah Booth Delaney, caught up with protecting a visiting professor of Greek literature at Ole Miss whose radical feminism may have sparked murder (40,000-copy first printing). In Jonasson's latest, Una is teaching in a remote Icelandic village when she discovers dark secrets the polite if distant villages have kept hidden for generations—perhaps involving The Girl Who Died (50,000-copy first printing). A peasant girl is murdered in a northern Chinese village, and exiled inspector Lu Fei takes the case in Klingborg's Thief of Souls (75,000-copy first printing). Brought back by Lupica in 2018, PI Sunny Randall investigates the suicide of best friend Spike's 20-year old niece in Robert B. Parker's Payback. In 1910, a senior barrister is found dead in a notorious London slum, and junior barrister Daniel Pitt endangers his family by investigating in Perry's Death with a Double Edge. In Walker's The Coldest Case, applying the facial reconstruction tools used on ancient skulls to the skull of a long-dead murder victim leads Bruno, chief of police in fictional town in the Dordogne, to the activities of a Cold War-era Communist organization. With A Peculiar Combination, Louisiana librarian Weaver detours from her beloved Amory Ames books to launch a new series starring Electra "Ellie" McDonnell, who cracks safes with locksmith uncle Mick to make ends meet in World War II England and agrees to help the government when she's caught (40,000-copy first printing). Copyright 2020 Library Journal.

Set in 1911, bestseller Perry's middling fourth mystery featuring London attorney Daniel Pitt (after 2019's One Fatal Flaw) opens with Daniel identifying a dead man in a police morgue as Jonah Drake, a colleague in his law firm. Drake's slashed corpse was found in the East End early that morning, but why was he in such a dangerous neighborhood at that time? Daniel breaks the sad news to his head of chambers, who fears the killing may have been related to Drake's work for the firm and asks Daniel to do some digging. Daniel uncovers unresolved questions concerning two homicide defendants Drake represented, including one whose father, Erasmus Faber, is the owner of Britain's biggest shipbuilding company. Daniel's policeman father warns him to tread carefully, as Faber's business is vital to a country fearful of a German naval buildup. Some melodramatic action mars the closing sections, and Daniel remains an undistinctive lead. Fans of Perry's longtime series leads, Thomas and Charlotte Pitt, Daniel's parents, will be disappointed. Agent: Donald Maass, Donald Maass Literary. (Apr.) Copyright 2021 Publishers Weekly.

Joining forces with Toby Kitteridge to investigate the murder of a senior barrister, Daniel Pitt follows leads through London’s teeming underworld, before hostile adversaries begin targeting his loved ones. By the best-selling author of the William Monk series.

Daniel Pitt’s investigation into his colleague’s murder leads him through London’s teeming underbelly to the suspicious dealings of one of England’s most influential shipbuilding magnates in a thrilling novel from New York Times bestselling author Anne Perry.“Timely . . . and engaging . . . another terrific mystery.”—BookreporterWhen junior barrister Daniel Pitt is summoned to the scene of a murder in the London district known as Mile End, he knows only that the victim is a senior barrister from the same firm. To Daniel’s relief, it is not his close friend Toby Kitteridge, but the question remains: What was this respected colleague doing in such a rough part of the city? The firm’s head, Marcus fford Croft, may know more than he admits, but fford Croft’s memory is not what it used to be, and his daughter, Miriam—Daniel’s sometime sidekick—isn’t in the country to offer her usual help. And so Daniel and Toby must investigate on their own, lest the police uncover something that may cast a suspicious light on the firm.Their inquiries in Mile End lead them to a local brothel and to an opium den, but also—unexpectedly—to a wealthy shipbuilder crucial to Britain’s effort to build up its fleet, which may soon face the fearsome naval might of Germany. Daniel finds his path blocked by officials at every turn, his investigation so unwelcome that even his father, Special Branch head Thomas Pitt, receives a chilling warning from a powerful source. Suddenly, not just Daniel but his whole family—including his beloved mother, Charlotte—is in danger. Will Daniel’s devotion to justice be the undoing of his entire life, and endanger Britain’s defense at sea? As ever, the fates of family and history are inextricably intertwined in this spellbinder from Anne Perry.