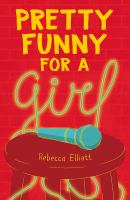 Pretty funny for a girl

"Haylah Swinton is an ace best friend, a loving daughter, and an incredibly patient sister to a four-year-old nutcase of a brother. Best of all, she's pretty confident she's mastered making light of every situation--from her mom's new boyfriend to unsolicited remarks on her plus-sized figure. Haylah's learning to embrace all of her curvy parts and, besides, she has a secret: one day, she'll be a stand-up comedian star. So when impossibly cool and thirstalicious Leo ...reveals he's also into comedy, Haylah jumps at the chance to ghost-write his sets. But is Leo as interested in returning the favor? Even though her friends warn her of Leo's intentions, Haylah's not ready to listen--and she might just be digging herself deeper toward heartbreak. If Haylah's ever going to step into the spotlight, first she'll need to find the confidence to put herself out there and strut like the boss she really is."--Amazon.

Haylah Swinton's mother works nights as a nurse, so Haylah doubles as a second mother to her four-year-old fireball of a brother, Noah, while dreaming of being a standup comic. When she's not making her family and friends laugh or studying comics online, she's writing jokes in her notebook and developing bits. Her only obstacle is not believing that she can make it on stage as a plus-size working-class girl. Enter Leo, her longtime crush, who reveals his funny side at the school talent show. Her heart flutters when he asks her to write his next set with him, but when reality hits, Haylah must take steps to validate herself. Haylah's is a feel-good story featuring a narrator who's likable and genuinely funny, even at her most self-deprecating. Dreams, being true to oneself, body-image issues, single parenting, family dynamics, self-confidence, and a realistic depiction of friendship make this a refreshing coming-of-age read full of optimism, dreams, and plenty of stereotype-smashing laughs. A natural pick for Dumplin' (2015) fans. Grades 7-11. Copyright 2020 Booklist Reviews.

Fourteen-year-old Haylah, who is fat and white, tells readers early on not to expect a story where "I have an epiphany and become a slim, sexy, health freak who's into yoga and mung beans." Instead, Elliott (the Owl Diaries series) gives sharp, funny Haylah multiple slower realizations—about friendship, her single mother and the man she's been dating, and, most importantly, about pursuing her dream of doing stand-up. Haylah's a comedy nerd: she watches it obsessively and keeps a notebook of material, so when it turns out that handsome, popular Leo, who is Black, also does stand-up, she can't resist slipping him some of her jokes. And when he likes them, how could she not develop a massive crush on him? The working-class British milieu feels freshly wrought, and Elliott's characters are well balanced: Leo's a bit of a user but not a heel, Haylah's conventionally pretty friends have their own insecurities, and her relationship with her four-year-old brother is lovingly depicted. Her comedy routine, though at times self-deprecating, also flips some stereotypes, and by book's end Haylah has begun taking charge of her present and her future. Ages 12–16. (Oct.) Copyright 2020 Publishers Weekly.

Gr 7 Up—Teenager Haylah Swinton wants to be a comedian. Not that there's much about her life that's funny: Her single mother works long shifts as a nurse, so Haylah is often the main caregiver for her four-year-old brother Noah. But after she's finished her homework, Haylah will try to find the humor in her life and create comedy routines. She obsessively watches stand-up comics on television for inspiration. She gave herself the nickname "Pig" at the beginning of "big school," as a preemptive strike so her peers wouldn't forever name her "Fatso" or "Chubster." The narrative covers a few months of her life as she comes to terms with her roles as a friend, a daughter, a sister, and as a young woman. She learns that she doesn't have to hide behind her "clumsy" persona and her baggy clothes, that she is an equal to her two best friends, and that even though she's not sure who she really is, finding out can be enjoyable. Elliott, who has previously published picture books and early readers, nails the voice and persona of a high school girl. VERDICT A good purchase for libraries that need coming-of-age books centering body-positivity.—Marlyn Beebe, Long Beach P.L., CA Copyright 2020 School Library Journal.

Fourteen-year-old Haylah dreams of being a stand-up star, but when her friends thrust her into the spotlight, she's not confident a plus-sized girl like her belongs onstage.Haylah Swinton is pretty confident she's mastered making light of every situation?from her mom's ugh boyfriend to classmates making unsolicited remarks on her figure. She logs all her best jokes in the hopes of one day busting out a fabulous set that will keep everybody laughing with her and not at her.After botching an open mic night, Haylah learns that her longtime crush, the impossibly cool Leo, is also into comedy. And when Leo provides her an opportunity to live vicariously by ghostwriting his sets for an upcoming festival, Haylah jumps at the chance. What a great way to get her material out there without totally bombing herself!But are Leo's intentions in Haylah's best interests? Despite warnings from her friends, Haylah's not ready to listen?and she might just be digging herself deeper toward heartbreak. If Haylah's ever going to take center stage, first she'll need to find the confidence to put herself out there and strut like the comedy queen she truly is.This contemporary YA rom-com stars a strong, memorable heroine and features a story full of heart, humor, and relatable themes of body image, dreams, and self-esteem.