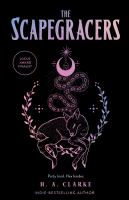 As a witch, lesbian, and lifelong outsider, Sideways Pike has had a hard time making friends. But when the three most popular girls pay her to cast a spell at their Halloween party, Sideways gets swept into a new clique. The unholy trinity are sugar-coated rattlesnakes, and now-- unbelievably-- Sideways' best friends. The four form a ferocious and powerful coven. They plan parties, cast curses on dudebros, try to find Sideways a girlfriend, and elude the fundamentalist witch hunters hellben...t on stealing their magic. But who knew that balancing human interaction with supernatural peril could be so complicated? -- adapted from jacket