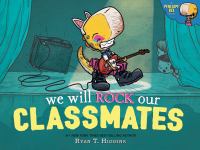 We will rock our classmates

Penelope the T. Rex was born to be a rock star. But playing her heart out is hard when her friends only see her as a dinosaur!

Penelope the T. rex has gotten over chowing down on fellow students (We Don't Eat Our Classmates, 2018), but she chafes at being typecast as a dinosaur whenever the others, who are all human kids, want to role-play. Unfortunately, her determination to show them that she can be more by rocking out at the upcoming talent show hits a sour note when she freezes up during the rehearsal. Maybe dinosaurs can't really sing or play guitar or be anything but dinosaurs. As in the opener, Dad's got a pep talk waiting at home. And so a rock star is born. Though she towers over her notably diverse schoolmates, Penelope looks anything but fearsome, sporting the shiny eyes and blunt, squared-off nose of a plush toy (even under heavy stage makeup). The ferociously scowling class goldfish Walter cuts a more fearsome figure—that is, until the curtain goes up on the climactic scene. Whether or not Penelope comes in first ends up not mattering too much—perceptive readers will understand that winning wasn't (and shouldn't be) the point. Grades 1-3. Copyright 2020 Booklist Reviews.

In this companion to We Don't Eat Our Classmates, Penelope the T. rex takes on the schoolwide talent show. As the only dinosaur among her human peers, Penelope is sometimes seen as more behemoth reptile than individual, something that doesn't keep her from her love of music until, at the talent show rehearsal, someone calls out, "Can dinosaurs even play guitar?" Feeling doubt, Penelope must decide whether her identity is more multifaceted than just "dinosaur." Higgins's mixed-media illustrations reflect a world populated by children diverse in skin tone, ethnicity, religion, and ability, supplemented by the colorful pop of fantasy that goldenrod-hued Penelope and her magenta overalls provide. The animal-human dynamics can feel hazy (Penelope's classmate has a nonanthropomorphic pet pony that Penelope wants to eat), but the message—the importance of pursuing passions despite limiting societal expectations—is encouraging. Ages 3–5. (July) Copyright 2020 Publishers Weekly.

PreS-Gr 2—Penelope is back from We Don't Eat Our Classmates. Penelope is the only T. rex in her school, where she loves to play, read, draw, and sing with her guitar. However, everyone tends to remember her first unfortunate days of gulping down her classmates and see her only in the role of dinosaur in their games. Signing up for the school talent show is difficult and scary. Her thoughts keep returning to words she heard as she first took the school stage—"Can dinosaurs even play a guitar?" After days of agonizing, and a memorable talk with her dad, Penelope realizes that being a T. rex is only part of who she is. With surprise, she discovers that her classmates actually want to be part of her band. Colorful digital illustrations with ink and graphite feature speech bubbles that enhance the dialogue, while full-page scenes detail Penelope's world at school and home, e.g., a moment of low self-esteem shrinks her to a small circle of light within a double-page spread of darkness. Penelope's feelings are easily identifiable in images of eyes bright with tears from sadness and insecurity or shy smiles of pride. VERDICT A thoughtful and humorous story. Penelope's latest adventure is a welcome addition for young readers and a suggested first purchase for all libraries.—Mary Elam, Learning Media Services, Plano ISD, TX Copyright 2020 School Library Journal.

As the only T. rex in her school, Penelope is often overlooked, but when she loses her confidence after signing up for the school talent show, her father and some friends help her find her courage.

The award-winning creator of We Don’t Eat Our Classmates and the Mother Bruce series presents the story of a talented T. rex who diligently practices for an upcoming school talent show before leaning on the support of her friends to overcome stage fright. 250,000 first printing. Illustrations.

Readers will twist and shout for this headbanging companion to the #1 New York Times best-selling We Don't Eat Our Classmates.Penelope is a T. rex, and she's very good at it. She also likes to rock out on guitar! With the school talent show coming up, Penelope can't wait to perform for her classmates. But sharing who you are can be show-stoppingly scary, especially when it’s not what people expect. Will Penelope get by with a little help from her friends?