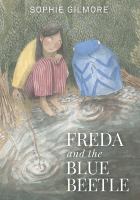 Freda and the blue beetle

"The townsfolk are always telling Freda to be more careful. They don't trust anything unknown or unusual--it could be dangerous. But Freda loves to explore new and strange things, which is how she makes lots of wonderful discoveries. One day she discovers a small, broken beetle. Freda befriends him and calls him Ernest. Ernest is new and strange, like many of the things that Freda loves, and turns out to be another wonderful discovery. As soon as Freda nurses him to health, he proves t...hat he is as strong as he is strange, and very helpful too! Although the townsfolk don't approve of him, he helps the village with heavy lifting, farming, and guarding flocks. But all of the hard work makes him hungry and eventually he gets so big that he needs more than one person's share of food, causing the townsfolk to mutter. One day a prize ewe goes missing and the townsfolk turn their blame on Ernest, and Freda is forced to send him away. The ewe shows back up and Freda is ridden with guilt. When a terrible storm puts the whole village in real danger, Ernest comes back to save them (by eating his way through the rubble they are trapped under). Freda learns an important lesson--when it comes to the things that matter, you should always listen to your own heart. Freda and the Blue Beetle teaches readers a valuable lesson about trusting their instincts, critically thinking about judgment passed by others, and keeping an open mind, even confronted with something or someone that is different."--