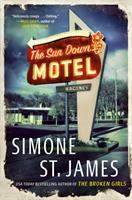 The Sun Down Motel

"The secrets lurking in a rundown roadside motel ensnare a young woman, just as they did her aunt thirty-five years before, in this new atmospheric suspense novel from the national bestselling and award-winning author of The Broken Girls. Upstate NY, 1982. Every small town like Fell, New York, has a place like the Sun Down Motel. Some customers are from out of town, passing through on their way to someplace better. Some are locals, trying to hide their secrets. Viv Delaney works as the nigh...t clerk to pay for her move to New York City. But something isn't right at the Sun Down, and before long she's determined to uncover all of the secrets hidden there. Upstate NY, 2017. Carly Kirk has always been fascinated by her aunt Viv who disappeared from the Sun Down before Carly was born. Using a small inheritance from when her mom dies, Carly leaves college to go to Fell to figure out what happened to her aunt thirty-five years ago. Soon, Carly is mirroring her aunt's life, working as the night clerk at the motel, which hasn't changed since 1982. The guest book is still handwritten, the rooms still have actual keys, and a haunting presence still lingers. Carly discovers that Viv had been trying to unravel mysteries of her own--including a possible serial killer working in Fell. If Carly can find the answers Viv was searching for, she might be able to solve the mystery that has haunted her family for years"--