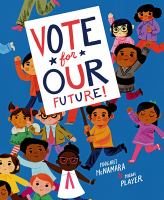 Vote for our future!

The students of Stanton Elementary School, which is a polling place, find out all they can about voting and then encourage everyone in their neighborhoods to cast their ballots. Creative nonfiction picture book: includes additional facts and historical details.

With the rise of new legislation mandating civic education before high school, this book could not be timelier. When the kids of Stanton Elementary learn that their school will close on Election Day to become a polling station, they are energized to participate, declaring that "kids have to live with adult choices," which is why they must help by urging voter participation. Vibrant illustrations contribute to the almost frenetic energy with which the children spread the word about Election Day. They encounter apathetic adults who are quick with excuses for not voting, but the children are ready with eloquent reasoning for why standing in line, being out of town, or thinking that a single vote won't make a difference are poor reasons for not heading to the polls. There's a bit of shaming going on here, and it's spot-on! A back-matter list of "Acts of Congress" gives examples of significant laws to dispel any lingering doubts about the importance of voting. A must-read in all social studies classes. Grades 1-3. Copyright 2019 Booklist Reviews.

Every Election Day, Stanton Elementary School "changes from a school to a POLLING STATION!" And while the kids who attend Stanton are too young to vote, they've realized, as McNamara puts it, "Kids have to live with adult choices!" So they're going to make sure those adults stop making excuses and exercise their right to vote. Player's digitally drawn cast may sport eager eyes, big smiles, and rosy cheeks, but they will not be denied. The kids canvass, help their own families develop voting plans, and when a woman tells one group she'll be out of town, little Mia pipes up, "In our state you can vote early!" And it works: the turnout is so big, it covers an entire double gatefold. An exhilarating tribute to junior grassroots organizing that might just inspire a Get an Adult to Vote movement. A list of acts of Congress concludes. Ages 4–8. (Feb.) Copyright 2019 Publishers Weekly.

K-Gr 3—Stanton Elementary closes on Election Day in November to serve the community not just as a school, but as a polling station for voters. The students decide to take action. They learn about the election process in an effort to spread the word about the importance of voting to those who actually have the power to vote—namely, the adults in their lives. From the author of A Poem in Your Pocket, this book is a motivational call to action. Avoiding divisive partisan rhetoric, McNamara instead addresses the many reasons people give for not voting. For instance, when one student approaches a woman about voting, the woman replies that she does not like waiting in line. The student replies that if she can wait in line for coffee or for a movie, she can wait in line to vote. It is also mentioned that voting early or by mail is a possibility. Information on how to access voting and voter registration information is prevalent throughout as the students research in the library and visit their local election office. At the end is a list of Congressional Acts that demonstrate the rights that have been awarded to Americans throughout history, offering inspiration for how voices can collectively make a difference. VERDICT This entertaining and engaging story has a powerful and timely message. The children sum it up best by stating, "Kids have to live with adults' choices," which makes voting a difficult task to ignore.—Kaitlin Malixi, Kensington Health Sciences Academy, Philadelphia Copyright 2020 School Library Journal.

The students of Stanton Elementary School, which is a polling place, find out all they can about voting and then encourage everyone in their neighborhoods to cast their ballots.

The diverse students at an elementary school that closes every other year to transform itself into a polling station learn about the importance of voting while encouraging the adults in their families to participate. By the author of Eliza. Illustrations.