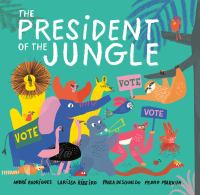 The president of the jungle

"Unhappy with Lion, the king of the jungle, the animals hold an election to choose a new leader"--

Lion is king of the jungle, but the power has gone to his mane. He's rerouted the river so it fills up his new swimming pool, and the other animals are not happy. In fact, after some protest demonstrations, they decide they don't want a king at all—they want to vote for a president. A list of election rules is put together (one animal, one vote; secret ballot; candidates cannot eat their opponents), and then it's campaign season, with Lion, Sloth, Snake, and Monkey giving speeches and participating in debates. Sloth wins, but not everyone is happy, so it's a good thing there's another election next spring! For kids who may be following a real election, this mix of fact and fun is occasionally confusing. But kudos for hitting most of the important election notes, including campaigning, ballots and voting, and how democracy works (a glossary is also provided). Children will be attracted by the lively, brightly colored art, combining cut-paper shapes and loose pencil lines. A clever introduction to a newsworthy topic. Preschool-Grade 1. Copyright 2019 Booklist Reviews.

When Lion, the King of the Jungle, reroutes the river to create a swimming pool at his house, his subjects promptly launch a demonstration ("#OCCUPYTHEJUNGLE"). But the King is unmoved, so Owl advocates for a new form of government: democracy. After a brief how-to, election rules are drawn up ("Candidates cannot eat their opponents"), and Monkey, Sloth, and Snake announce their candidacies and platforms, with Lion quickly following suit. Debates and mudslinging ensue until Sloth wins and gives a gracious speech promising a coalition "to help us make the jungle a great place for every animal"—while the final page reminds readers that dissatisfied voters will have their say again in a year. Originally published in Brazil (the creators are artists and activists), this savvy, compellingly instructive book uses bright, giddy images created from digitized cut paper and charcoal to embrace the circus-like atmosphere of elections. Ages 5–8. (Jan.) Copyright 2019 Publishers Weekly.

Gr 2–4—The animal kingdom decides to replace its monarchy with a democracy after Lion, King of the Jungle, reroutes a public water supply for his own private swimming pool. Candidates for anthropomorphic animal president include Snake, Cobra, and Sloth. As they begin their campaigns, bolded vocabulary words like debate and rally are defined. The back includes a glossary of all the election terms. Colorfully busy compositions of the political creatures are unpolished, but convey bumbling charm. Even though the subjects are animals, their election is a modern one with TV interviews and social media campaigns. The text is nonpartisan and animals come from a variety of real-world equivalent political backgrounds, such as political dynasties or grassroots candidates. However, considering President Obama's 2008 campaign featured numerous slogans that included the word "change," making Monkey the candidate for change is a less-than-thoughtful choice. VERDICT Ironically, a herd of animals may be a smart way to humanize presidential elections for our young future voters.—Chance Lee Joyner, Wilton Public and Gregg Free Library, NH Copyright 2019 School Library Journal.

"Unhappy with Lion, the king of the jungle, the animals hold an election to choose a new leader"--

In this fabulous and funny introduction to how elections work, the animals decide they are tired of their king and that it is time to vote for a president.Lion may be King of the jungle, but lately he only seems to care about himself. His subjects are fed up, so they decide to try something new--hold an election! Once Owl explains the rules, the fun begins, and Snake, Sloth, and Monkey all announce they will be candidates. But oh no, Lion is going to run too! It's a wild campaign season as the animals hold rallies, debate, and even take a selfie or two, trying to prove why they'd make the best president of the jungle. This funny, non-partisan story features lively illustrations, a helpful glossary, and colorful characters who have an infectious enthusiasm for the election process.