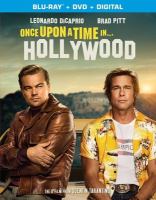 Once upon a time... in Hollywood

From 1958 to 1963, American actor Rick Dalton knew the height of fame and fortune as the lead in the television series Bounty Law. Yet, Rick wasn't satisfied with the work and used his popularity to try to become a movie star. By 1969, Rick's career has stalled so much that he takes jobs as a guest star on various shows. He even starts wondering if the only way he can make a comeback is by acting in Italian productions. Cliff Booth, Rick's long-time friend and stunt double, helps ...him see that possibilities for success still exist in the Los Angeles film industry if they work together.