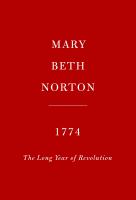 1774 The long year of Revolution

"A book on the American Revolution that looks at the critical "long year" of 1774, and the revolutionary change that took place from December 1773 to mid-April 1775, from the Boston Tea Party and the first Continental Congress to the Battle of Lexington and Concord."--

Scholar Norton wants readers to know there was nothing simple about the tumultuous year of 1774 in the soon-to-be United States. Starting in late 1773 and proceeding until the spring of 1775, this step-by-step walk through political events in the American colonies casts aside any notions of consensus and unanimity. History is most certainly told by the winners, but contemporary newspaper accounts, letters, and sermons provide the narratives not told in our modern textbooks. The story of the Boston Tea Party, passed down throughout American history, is brought into the light as a multifaceted, controversial event. This laying out of detailed facts concerning everything from the aforementioned tea-dumping to the First Continental Congress encourages readers to question previous assumptions. Norton quotes firsthand accounts and draws on her long history of Loyalist scholarship to underline that what now seems an inevitable page in American history was not always so clear, and the past that we harken back to is sometimes all too similar to our present day. Copyright 2019 Booklist Reviews.

Norton (emer., Cornell Univ.), a well-known historian, argues that the year 1774—or what she refers to as "'the long 1774,'" which includes December 1773 through mid-April 1775—was vital to the growth of the American independence movement. She illustrates that events that took place throughout the colonies—not just in Massachusetts—cultivated colonists' interest in protest and, ultimately, independence. Rather than present the Revolutionary period as an era of unity among angry colonies, Norton shows the nuances of political disagreement, even among the Founding Fathers. Readers will find this work both useful and interesting, as it fleshes out the story of Revolutionary America by providing lesser-known stories alongside well-known events. Although focused on North America, the book also presents perspectives from Great Britain by including segments entitled "Advices from London" (or the appropriate city) to share how the British government and British subjects elsewhere responded to events in the colonies. Such insight allows for greater understanding of the complexities of the American Revolutionary period and how 1774 cultivated an independence movement. Summing Up: Highly recommended. General readers through faculty.--T. K. Byron, Dalton State CollegeTammy Kae ByronDalton State College Tammy Kae Byron Choice Reviews 58:01 September 2020 Copyright 2020 American Library Association.

Pulitzer Prize finalist Norton (Founding Mothers & Fathers) draws on pamphlets, newspapers, and personal correspondence to reconstruct the political conversation that raged in the American Colonies from the Boston Tea Party in December 1773 to the Battles of Lexington and Concord in April 1775. At that time, governors began informing London that they couldn't stop the rising power of revolutionaries, and even loyalists conceded that war was inevitable. Copyright 2019 Library Journal.

Norton (Founding Mothers & Fathers) emphasizes that during the "long 1774," from the Boston Tea Party in December 1773 until the battles at Lexington and Concord in April 1775, there were critical shifts in sentiment and action regarding British control throughout all of the American colonies. Thoughts of reconciliation with Great Britain turned toward revolution within months. The author examines contemporary documents to reveal the polarizing disagreements and debates among both common and prominent colonists that historians have generally disregarded. Opposition to radical views was suppressed through intimidation and lack of access to the press, giving the perception that radical thought was pervasive. "Patriotic terror"—threats of death, injury, property destruction, and defamation—prevented conservatives from speaking out. Meanwhile, local committees tyrannically enforced the agreement to boycott British goods passed by the first Continental Congress in the fall of 1774. VERDICT Norton's cogent discussion of the details of the "long year" will appeal to colonial and revolutionary period scholars and enthusiasts. Her inclusion of suppressed female and loyalist voices should be applauded. [See Prepub Alert, 8/5/19.]—Margaret Kappanadze, Elmira Coll. Lib., NY Copyright 2019 Library Journal.

Pulitzer Prize finalist Norton (Separated by Their Sex) presents a meticulous and persuasive chronicle of the "debates, disagreements, and disruptions" that shaped political discourse in colonial America prior to the Revolutionary War. Beginning with the Boston Tea Party in December 1773 and concluding with the clashes at Lexington and Concord in April 1775, Norton reveals that the period was more discordant than is commonly believed. She notes that Benjamin Franklin and George Washington disapproved of the destruction of the East India Company's tea, and that Massachusetts merchant John Hancock was the first to propose an "intercolonial congress" in anticipation of the British government's response. After receiving news that Parliament had voted to close Boston's port, town leaders called on the other colonies to join a retaliatory boycott of trade with England. New York City, Norton writes, became the "progenitor of public Loyalism" in the fall of 1774, as conservative colonists and merchants eager to supply British troops occupying Boston learned that the First Continental Congress would endorse nonimportation. Making extensive use of pamphlets, newspaper articles, correspondence, and meeting minutes, Norton brings underappreciated figures such as Pennsylvania lawyer John Dickinson to the fore, and elucidates complex developments in all 13 colonies. This ambitious deep dive will remind readers that America has a long history of building consensus out of fractious disputes. (Feb.) Copyright 2019 Publishers Weekly.

A Pulitzer Prize finalist and 2018 president of the American Historical Association examines the critical “long year” of 1774 and the revolutionary change that took place from December 1773 to mid-April 1775, from the Boston Tea Party and the first Continental Congress to the Battles of Lexington and Concord. Illustrations. Tour.

"A book on the American Revolution that looks at the critical "long year" of 1774, and the revolutionary change that took place from December 1773 to mid-April 1775, from the Boston Tea Party and the first Continental Congress to the Battle of Lexington and Concord."--

From one of our most acclaimed and original colonial historians, a groundbreaking book tracing the critical "long year" of 1774 and the revolutionary change that took place from the Boston Tea Party and the First Continental Congress to the Battles of Lexington and Concord.A WALL STREET JOURNAL BEST BOOK OF THE YEARIn this masterly work of history, the culmination of more than four decades of research and thought, Mary Beth Norton looks at the sixteen months leading up to the clashes at Lexington and Concord in mid-April 1775. This was the critical, and often overlooked, period when colonists traditionally loyal to King George III began their discordant “discussions” that led them to their acceptance of the inevitability of war against the British Empire. Drawing extensively on pamphlets, newspapers, and personal correspondence, Norton reconstructs colonial political discourse as it took place throughout 1774. Late in the year, conservatives mounted a vigorous campaign criticizing the First Continental Congress. But by then it was too late. In early 1775, colonial governors informed officials in London that they were unable to thwart the increasing power of local committees and their allied provincial congresses. Although the Declaration of Independence would not be formally adopted until July 1776, Americans had in effect “declared independence ” even before the outbreak of war in April 1775 by obeying the decrees of the provincial governments they had elected rather than colonial officials appointed by the king. Norton captures the tension and drama of this pivotal year and foundational moment in American history and brings it to life as no other historian has done before.