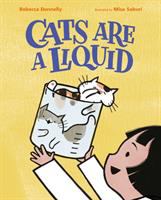 Cats are a liquid

Illustrations and simple, rhyming text pay tribute to cats and their resemblance to a liquid. Includes facts about states of matter and directions for making oobleck.

In an endlessly amusing—and strangely thought-provoking—premise ("based on the Ig Nobel Prize–winning investigation"), cats are depicted doing everyday things—lounging, napping, climbing, peeing, bathing—while the text offers double entendres that could refer to the physiology of either housecats or of liquids. As "Cats fill. / Cats spill. / Cats flow downhill," we see a row of beakers with contented kitten heads poking out, one of them tipping over and taking a glass of milk along for the ride. A diverse cast of child-scientists in lab coats interacts with the subjects, all of whom seem quite pleased, free to make mischief in the name of science. Saburi wields a wide array of breeds, depicting them in adorably simple poses reminiscent of Pusheen. Donnelly's pouncing rhymes are kept interesting by sections that mix up the rhythm, along with variations on the refrain: "Cats are a liquid / except when they're not." Pair this gem with A Greyhound, a Groundhog (2017) for a rollicking story time inclusive of cat- and dog- (and hog-) lovers. Preschool-Grade 2. Copyright 2019 Booklist Reviews.

Inspired by an actual scientific paper, this amusing STEM picture book explores whether and how cats are a liquid "based on the way cats... fill up any container they squeeze themselves into. As Donnelly's loose, easy rhymes ("Cats slop./ Cats plop./ Cats drizzle,/ slosh,/ flop") playfully probe the proposition, cleverly riffing on liquid's qualities, the book's humor is largely visual. Digital illustrations by Saburi fully exploit the investigation with screwball scenes of kitties stuffed into beakers, lying melted in a patch of sun, drifting through the sky like mist, and wreaking classic cat havoc as they're tested by an inclusive group of child scientists. As Donnelly and Saburi display, liquid-ish felines make delightful, funny subjects for scientific research and picture books alike. Back matter includes a recipe for cornstarch "oobleck" and further information about the science joke at the heart of the book. Ages 4–8. (Oct.) Copyright 2019 Publishers Weekly.

PreS-Gr 2—A bevy of things cats are and aren't is explored in rhythmic, poetic text. "Cats fill./Cats spill./Cats flow downhill./Cats tip./Cats drip./Cats grip, snip, rip./Cats are a liquid/except when they're not." A vast variety of hilarious cats and kid scientists are depicted on the spreads, which match and give depth to the text, as they explore the laws of nature. There is plenty of action, great facial expressions, and movement as text placement varies on each page. A kid-friendly afterword explains the genesis of the question "Are cats liquid?," discusses matter, and has a recipe for a simple semi-solid. VERDICT A humorous, poetic look at the solidity of cats in all their manifestations. The perfect segue to a science or poetry lesson, and good read-aloud fun as well.—Catherine Callegari, Gay-Kimball Library, Troy, NH Copyright 2019 School Library Journal.

Inspired by a Nobel Prize-winning physicist’s investigation into the common properties of cats and liquids, a playful ode to “fluid cats” introduces the scientific characteristics of liquids and how cats do many of the same things, from flowing to fitting into containers. Simultaneous eBook. Illustrations.

Illustrations and simple, rhyming text pay tribute to cats and their resemblance to a liquid. Includes facts about states of matter and directions for making oobleck.

Celebrate cats in all their flowing, furry glory in Cats Are a Liquid, a charming picture book that examines the unusual physical properties of felines by writer Rebecca Donnelly and illustrator Misa Saburi.Cats fill./ Cats spill./ Cats flow downhill.// Cats tip./ Cats drip./ Cats grip, snip, rip.// Cats are a liquid/ Except when they’re not.Inspired by an Ig Nobel Prize–winning investigation of how cats behave like liquids, this book introduces some of the physical properties of liquids—they adapt to fit a container, they flow like fluids—and is just pure fun. Like its inspiration, it makes you laugh, then think. Back matter includes a brief introduction to the different physical states: solid, liquid, gas.