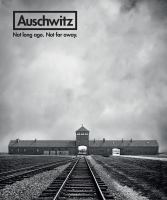 Auschwitz Not long ago. not far away

"The exhibition Auschwitz: Not Long Ago. Not Far Away. uses 600 original objects, 400 images, and 10 stories to provide a comprehensive history of Auschwitz concentration camp and the role it played in the Holocaust. The catalog of Auschwitz: Not Long Ago. Not Far Away. is not only a valuable document of this unprecedented exhibition, but one of the best books for the general readers on the history of Auschwitz, where 1.1 million people - mostly Jews, but also non-Jewish Poles, Roma, and ot...hers - lost their lives"--

In 2001, the Museum of Jewish Heritage opened in lower Manhattan, in sight of Ellis Island and the Statue of Liberty. Now the third-largest Holocaust museum in the world, it has devoted three of its floors to a major traveling exhibit. Historian van Pelt (Auschwitz: 1270 to the Present) offers not only a catalog of the exhibit but an authoritative history of the transformation of the small Polish village named after the Aramaic word for guests to a Nazi death camp where 1.1 million people were killed. As visitors approach the exhibit, they are confronted by a German National Railway freight car similar to the ones that carried men, women, and children to the camps. They then walk through hundreds of photographs, maps, architectural plans, works of art, artifacts—ragged shoes, coats, dresses, prisoners' uniforms, a trumpet played by a jazz musician—and even a reconstruction of an Auschwitz barracks. The items come from the museum's collection as well as from Poland's Auschwitz-Birkenau State Museum and more than 20 other institutions and private collections from around the world. VERDICT Whether readers have visited the Auschwitz museum or are experiencing it here for the first time, this comprehensive yet accessible work presents a sobering history. Highly recommended for both public and academic libraries.—Marcia G. Welsh, Dartmouth Coll. Lib., Hanover, NH Copyright 2019 Library Journal.

In this haunting work, historians Van Pelt, Ferreiro, and Greenbaum present a powerful companion to the eponymous international exhibition. The exhibition—and the book—focuses on "the traces of genocide, the remnants of a murdered people, and the material evidence of crimes against humanity." Jews, Poles, POWs, Roma, and homosexuals were all targets of the Nazis and collaborators, and the authors tell their stories through photographs, letters, drawings, anti-Semitic propaganda posters, and artifacts (the socks of an eight-year-old girl that muffled the sound of her walking while she hid in Poland). All the images converge to depict the horrific and revolting way in which Auschwitz was designed not just to murder, but to destroy and dehumanize the spirit of its victims: there's a photo of the courtyard of Block 11, where many prisoners were executed naked by firing squad, and another of a young Jewish woman wailing as she was rounded up in Berlin. The authors include prisoner stories that illustrate the many acts of bravery and rebellion, including that of Witold Pilecki, a second lieutenant in the Polish cavalry, who led a resistance movement while imprisoned. This informative and disturbing photographic history serves as an immensely moving reminder of the atrocities of Auschwitz. (May) Copyright 2019 Publishers Weekly.

This catalogue of the first-ever traveling exhibition about the Auschwitz concentration camp tells the stories behind the more than 280 objects and images, providing an encompassing history of Auschwitz, which has become a powerful site of remembrance.

This book tells a story to shake the conscience of the world. It is the catalogue of the first-ever traveling exhibition about the Auschwitz concentration camp, where 1.1 million people—mostly Jews, but also non-Jewish Poles, Roma, and others—lost their lives. More than 280 objects and images from the exhibition are illustrated herein. Drawn from the Auschwitz-Birkenau State Museum and other collections around the world, they range from the intimate (such as victims’ family snapshots and personal belongings) to the immense (an actual surviving barrack from the Auschwitz III–Monowitz satellite camp); all are eloquent in their testimony. An authoritative yet accessible text weaves the stories behind these artifacts into an encompassing history of Auschwitz—from a Polish town at the crossroads of Europe, to the dark center of the Holocaust, to a powerful site of remembrance. Auschwitz: Not long ago. Not far away. is an essential volume for everyone who is interested in history and its lessons.

This book tells a story to shake the conscience of the world.

Auschwitz: Not long ago. Not far away.