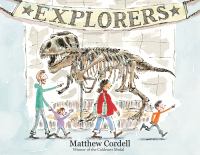 "When a family goes to a local museum, a boy notices a homeless man sitting outside, making brightly colored origami birds. He convinces his dad to buy a bird the man makes just for him. Once inside the museum, his little sister takes the bird and launches it into the air. Is it lost? Soon another boy helps him look, and the paper bird brings two families--and two new friends--together" --

*Starred Review* A family of four visits a local natural history museum and their lives are enriched in ways they never could have anticipated in this mostly wordless story. Before arriving at the museum, a boy buys a toy from a street vendor whose sign advertises, simply, "Magic." The flying birdlike toy is so much fun the child runs from room to room inside the building, flying and catching it, much to his parents' growing dismay. At one point, another boy catches the toy; its original owner immediately and rudely rips it from his hand. The child who caught it belongs to another family of four, but they have brown skin and the mother and daughter wear hijabs. After a stern talking-to by his father, the toy's owner feels bad about his behavior—clearly apparent from his facial expressions. How he ultimately loses his flying toy and his family—temporarily—in the vast building and the way in which Caldecott medalist Cordell (Wolf in the Snow, 2017) concludes his wordless tale are most satisfactory. Through his loose illustration style, done in pen and ink with watercolor, he uses various perspectives to tell this charming tale of kindness and friendship. Is it coincidence, or is it "Magic"? Preschool-Grade 2. Copyright 2019 Booklist Reviews.

In this wordless adventure from Caldecott Medalist Cordell (Wolf in the Snow), a white boy sets out with his family—father, mother, younger sibling—to a natural history museum, stopping on the way in to buy a wind-up flying toy from a street vendor seated beneath a sign that reads "Magic." It flies beautifully, murmuring "KSSSSHH," and the boy can't resist launching it inside, past the dinosaurs and the statues, until another boy, whose family has brown skin and whose mother and younger sister wear hijabs, catches it deftly. The owner snatches it back, and his father scolds him. He's crushed; Cordell shows him with his family on a bench, drinking his juice, a faraway stare in his eyes. Cordell resolves the story slowly, in small steps, as the two families meet again and become better acquainted. In loosely drawn panels, the boy's shifting emotions make him easy to empathize with as he's by turns baffled, tense, and vexed by the conflict between wanting his toy and wanting to be generous. As readers see him loosening his boundaries to become a more bighearted version of himself, the moment feels welcome and real. Ages 2–6. Agent: Rosemary Stimola, Stimola Literary Studio. (Sept.) Copyright 2019 Publishers Weekly.

PreS-Gr 2—A young boy and his family embark on a day trip to a history museum. As they walk there, they encounter a homeless man creating origami birds that he advertises as magical. The family purchases one for the boy and he enthusiastically launches it into the air repeatedly, even throughout the museum, landing himself in a few sticky situations. When another child catches the rogue bird, the boy is taken aback and angrily snatches the bird away, hurting the feelings of the helpful youngster. As the story progresses, the boy learns about the power of forgiveness, helpfulness, and kindness and a beautiful friendship between families blossoms. This wordless picture book from Caldecott winner Cordell brilliantly tells the story of a regular outing. The family dynamics, as displayed through the body language and facial expressions of the characters, are touching and authentic. The scenario is engrossing and the interactions between characters evoke emotion. The pen-and-ink with watercolor illustrations are compelling and thought-provoking, telling the story in its entirety yet allowing readers plenty of room for their own predictions and interpretations. VERDICT A substantial picture book about the very best kind of magic. A first purchase.—Amy Shepherd, St. Anne's Episcopal School, Middleton, DE Copyright 2019 School Library Journal.

During a family visit to a museum, a young boy buys an origami bird from a homeless man, but when he loses the bird inside the museum, another boy helps him find it, bringing two families together.

A visit to a museum culminates in unexpected adventure when a boy loses something important before an act of forgiveness bonds two families and introduces a new friend. By the Caldecott Medal-winning creator of Wolf in the Snow. Illustrations.

From Caldecott Medalist Matthew Cordell, Explorers is a new picture book about an extraordinary trip to a museum.When a family goes to a local museum, a boy notices a homeless man sitting outside, making brightly colored origami birds. He convinces his dad to buy a bird the man makes just for him.Once inside the museum, his little sister takes the bird and launches it into the air. Is it lost? Soon another boy helps him look, and the paper bird brings two families—and two new friends—together.With the style he used in Wolf in the Snow, Matthew Cordell shows how an ordinary family outing can be both extraordinary and magical.