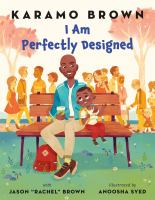 I am perfectly designed

A father and son share a day in the city and a conversation about what they love about each other.

Written in the tradition of African American picture-book titles such as Jeannette Caine's Just Us Women (1982) and Will Smith's Just the Two of Us (2001), this father-son story provides another beautiful narrative of what it means to be connected to the unconditional love of a parent. Throughout the book, a young boy and his father take long walks through the neighborhood, engaging in discussions that reinforce their lifelong bond. For instance, on one page the boy asks if his father remembers when they dressed as syrup and waffles for Halloween (adorable!), and the opposing page confirms that Dad remembers and leads to speculation about their next costume. Written by Karamo Brown (of Queer Eye fame) and his son Jason, the text appears as a sweet dialogue between parent and child that, while not always realistic, is brimming with love. Syed's wonderful illustrations depict realistic, colorful images of the characters living in a diverse city, acting as subtle demonstrations of how all children are worthy of love just by being themselves. Grades K-2. Copyright 2019 Booklist Reviews.

The culture adviser of Queer Eye teams up with one of his sons in a tribute to both the parent-child relationship and the process of growing up. "Perfectly designed" serves as the book's refrain, as the father assures a confident boy that he has all that it takes to explore and succeed in the world, even when the boy gets "mad, or sad, or confused." Told in two voices, the narrative's tone is upbeat and earnest—maybe, at times, a little more so than necessary—but the authors make room for some mild family playfulness. Father and son recall going as waffles and (organic) maple syrup for Halloween, and as readers see a series of family photos arrayed on a table, the son notes, "When I was a baby, I looked just like you.... Only I had no hair, and you had lots. Now," referencing the older Brown's trademark bald pate, "it's the opposite." Illustrations by Syed (Bilal Cooks Daal) have a wide-eyed, Disney animation pep and exude a breezy spirit of inclusivity—the end pages depict the protagonists surrounded by a wide range of happy couples and families (and the rest of the Fab Five). Ages 4–8. (Nov.) Copyright 2019 Publishers Weekly.

A father and son take a walk through the park and remember all the ways in which they are perfectly designed for each other.

Told in two voices, as a father and son share a nostalgic day, the father reminds his son he has all that it takes to explore and succeed in the world.

I Am Perfectly Designed is an exuberant celebration of loving who you are, exactly as you are, from Karamo Brown, the Culture Expert of Netflix's hit series Queer Eye, and Jason Brown—featuring illustrations by Anoosha Syed.In this empowering ode to modern families, a boy and his father take a joyful walk through the city, discovering all the ways in which they are perfectly designed for each other."With tenderness and wit, this story captures the magic of building strong childhood memories. The Browns and Syed celebrate the special bond between parent and child with joy and flair...Syed's bright, cartoon illustrations enrich the tale with a meaningful message of kindness and inclusion."—Kirkus