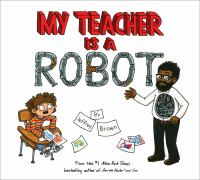 My teacher is a robot

From the author of the "New York Times"-bestselling Jedi Academy books comes an imaginative picture book about a kid whose creative outlook has everyone at school seeing the world through new eyes. Fred does not want to go to school because it's boring. Especially since he thinks his teacher is a robot. If only Fred could imagine a way for his day to be more exciting...

Cognitive dissonance runs wild as young Fred tries to sell his diverse classmates on the idea that school is designed only to turn out dull robots. But the pictures here tell a very different story. The day starts with the arrival of a humongous spider (in reality, small to the point of invisibility) during math, after which the class thunders out to a recess battle of mud monsters versus superheroes, followed by class projects on Japan, demonstrating brush painting, tea, and samurai armor. After everyone climbs into spacesuits for some interplanetary lunch, a session of creative writing features a wordless melee pitting the students (variously armed, armored, and mounted on magical creatures) against an army of robots led by (who else?) their teacher. When his dad meets him outside school after the bell, with the question "How was school?" Fred's "Boring" is belied by the rush of dinosaur-riding, space-suited, muddy, spandex-clad, mechanical students in the background beneath a bright rainbow. No one, including, from his expression, Fred himself, takes his claims very seriously—and perhaps some readers won't either.HIGH-DEMAND BACKSTORY: Brown's wry humor made Darth Vader and Son (2012) a hit, and it will send this not-at-all boring classroom adventure flying off the shelves. Grades 1-3. Copyright 2019 Booklist Reviews.

In this anecdotal tale, Brown (the Lucy & Andy Neanderthal series) steps out of the Stone Age into the flamboyant realm of a boy's imagination. Fred grumps that everything his dry, no-nonsense teacher says is "robot talk," and the boy's boredom propels his imaginings into overdrive: a spider dangling from the ceiling morphs into a gargantuan arachnid, a clump of dirt on the rainy playground springs to life as a "mud monster," and a history class on ancient Japan becomes a lesson on dinosaurs as several commandeer the classroom. When it's time for a writing test, Fred carps, "I bet we aren't even allowed to use our imaginations!"—but of course his flips into high gear, continuing to find evidence of teacher-as-robot until the final bell. Brown's vivid, glossy cartoons drolly interject Fred's whimsical daydreams into the classroom. Ages 3–7. (June) Copyright 2019 Publishers Weekly.

K-Gr 2—Fred thinks school is boring and is convinced that his teacher Mr. Bailey is a robot. As the school day starts, Fred is already unhappy until he spots a spider during math. He suddenly envisions a giant spider taking over the class. Fred's class ventures outside for recess but the rain cuts their playtime short. Fred thinks its because Mr. Bailey will short circuit. During history class, Fred is excited because he wants to learn about dinosaurs. He finds they are learning about Japan and decides not to participate. After lunch, Mr. Bailey says he's going to test them. Fred interrupts him saying he thinks Mr. Bailey is going to assign numbers to his classmates so he can keep track of them when he turns them into robots. Mr. Bailey is really just testing their writing skills and Fred is finally happy they get to write about what they want. When his dad comes to pick him up, he asks Fred about his school day and he says it was boring. Readers can see he is really smiling, thinking about the story he created. This picture book is sure to be a hit because of the large, colorful illustrations. The characters look modern, and Fred's futuristic vision of the classroom is fun to contemplate. VERDICT This is a great pick for a read-aloud to first and second graders who will understand the concept of not wanting to go to school but enjoying it anyway.—Amy Lukich, Tinley Park Public Library, IL Copyright 2019 School Library Journal.

"Fred does not want to go to school because it's boring. Especially since he thinks his teacher is a robot. If only Fred could imagine a way for his day to be more exciting..."--

Finding school boring and believing his teacher to be a robot, young Fred tries to think of ways to make his day more exciting, from pretending the classroom is filled with dinosaurs to imagining that tests are being mandated by an evil overlord. Simultaneous eBook.

Fred is bored at school and is sure his teacher is a robot, as he helps his classmates see their lessons in a new, imaginative way.

From the author of the New York Times bestselling Jedi Academy books comes an imaginative picture book about a kid whose creative outlook has everyone at school seeing the world through new eyes. Perfect for fans of The Adventures of Beekle and The Most Magnificent Thing.Fred does not want to go to school because it's boring. Especially since he thinks his teacher is a robot. If only Fred could imagine a way for his day to be more exciting...An inventively funny picture book that celebrates the boundlessness of a child's imagination and celebrates the teachers, families, and friends who get wrapped up in their fantastic worlds.