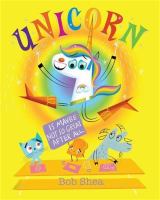 Unicorn is maybe not so great after all

Concerned about losing friends during the first week of school, Unicorn upgrades his fabulousness.

*Starred Review* In this follow-up to Unicorn Thinks He's Pretty Great (2013), it's back-to-school time and Unicorn's ready to be noticed. However, his classmates, even his pal Goat, are more interested in a new fad, rubber bands in unusual shapes, leaving Unicorn feeling like an un-awesome "yawn-icorn." Determined to regain the spotlight, he returns the next day with a "sassy new look and cheery, whimsical attitude." But whether he's blithely throwing glitter, disrupting lunchtime by turning a classmate's sandwich into gold, or appointing himself halftime performer for the school's soccer match, his self-centered behavior irritates everyone, who tell Unicorn to go home. However, with unexpected help and perspective, Unicorn discovers what makes him feel truly awesome. Shea's vibrant, energetic illustrations, jam-packed with scribbles and doodles, are just the right match for Unicorn's over-the-top plan (not content with "making it rain cupcakes," Unicorn ups the ante with "full-size, flaming birthday cakes"—to his classmates' dismay). Comical background details, such as a montage of students finding shapes in rubber bands ("A bicycle tire!" "A porthole! Porthole, porthole. Another porthole!" "A doughnut!"), add even more laughs. Text formatting, sound effects, and some meta humor lend further peppiness. The busy layouts and numerous visual asides and commentary are perfectly in keeping with the frenetic pace. This uproarious, entertaining look at attention, self-esteem, and being a good friend is sure to find an enthusiastic audience. HIGH-DEMAND BACKSTORY: Shea's no stranger to the best-seller lists, and his fans will be eager for this one, too. Grades K-2. Copyright 2019 Booklist Reviews.

In a sequel to Unicorn Thinks He's Pretty Great, it's the first day of school and Unicorn's confidence hasn't waned: "There's nothing to be nervous about!" he assures his friend Goat. "Let me go first, in case there are photographers." But his big entrance doesn't get the reception he'd expected—his animal classmates (including some familiar faces) are distracted by other diversions, including "rubber bands that look like other things" and a poster advertising a visit from "Famous Author Bob Shea." Unicorn hatches a plan to reinvent himself with a "sassy new look," featuring go-go boots, a rainbow wig, and fake teeth. The garb proves more alarming than whimsical, however, and Unicorn ends up home alone sobbing in a ragged bathrobe. Luckily, true friends appreciate the real Unicorn, who, they communicate, is "MAGICAL!" just the way he is. Through his relatable, flawed hero, Shea suggests that one can be authentic and special without being a diva. Ages 3–5. (July) Copyright 2019 Publishers Weekly.

PreS-Gr 1—Unicorn is ready to start school with his friend Goat, but becomes upset when he is not the center of attention. In an attempt to win back favor, Unicorn dons a new fancy look, covers everyone in glitter, and throws flaming birthday cakes into a crowded soccer game. He is told to go home, leaving Unicorn to doubt himself and his friendships. Shea never fails to deliver and the follow-up to Unicorn Thinks He's Pretty Great does not disappoint. Unicorn and Goat's classmates include some familiar Shea characters, including Dinosaur and Ballet Cat, along with a humorous ice cream cone and piece of toast. Much like Unicorn, the illustrations dazzle and excite, and the text is hilarious and packed with rich vocabulary for young readers. Text and images in the margins and background are equally as engaging and funny, inviting readers to revisit the pages again and again for small details one might have missed. While Unicorn is home and depressed following his failed attempts at gaining positive attention, the pages take on a darker tone. His eyes become bloodshot and he wears a bathrobe, another example of subtle details that are among Shea's strengths. Eventually, the pages return to a cheerful palette of pastels and sparkles once readers reach the happy ending complete with a valuable lesson about friendship. VERDICT A sensational choice for any collection and a welcome addition for Shea's many fans.—Kaitlin Malixi, Kensington Health Sciences Academy, Philadelphia Copyright 2019 School Library Journal.

A riotous follow-up to Unicorn Thinks He's Pretty Great finds Unicorn expecting to make his usual big splash on the first day of school only to encounter classmates who are more interested in a trendy toy. 35,000 first printing.

On the first day of school, Unicorn expects to make his usual big splash only to encounter classmates who are more interested in a trendy toy, driving Unicorn to come up with a plan to recover his magic.

Concerned about losing friends during the first week of school, Unicorn upgrades his fabulousness.

Unicorn's on a quest to get his groove back in this must-have companion to the kid-favorite bestseller Unicorn Thinks He's Pretty Great You remember Unicorn. You know, Goat's friend? The one who can fly, make it rain cupcakes, and turn things into gold? On the first day of school, Unicorn expects to make his usual big splash. But no one pays him much attention--the other kids are much more interested in the latest trend in toys: rubber bands that look like other things. Unicorn comes up with a plan to get his mojo back, but his efforts turn out to be more annoying than impressive. Can Goat help him recover his magic, or is Unicorn destined to a life of mediocrity?Don't miss the hilarious book that started it all, Unicorn Thinks He's Pretty Great by Bob Shea!