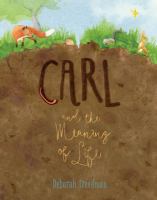 Carl and the meaning of life

When a field mouse asks Carl the earthworm why he tunnels through the dirt, Carl doesn't have an answer, so he sets off to find out.

*Starred Review* Carl the earthworm spends his days burrowing underground, eating hard dirt, and turning it into fluffy soil. But when a field mouse asks him why he does this, Carl is stumped and sets off to find out. The tiny pink annelid crawls through the grass and makes inquiries among a variety of animals. A rabbit reveals she lives for her babies, but child-free Carl knows that can't be his raison d'être. Next, he approaches a fox, whose purpose is to hunt, and then a squirrel, whose nutty habits cause trees to grow. Yet no one knows the meaning behind Carl's subterranean activities. As he continues his journey, the neglected ground around his home turns hard and uninhabitable. Returning to this barren landscape, Carl finally understands how he fits into the bigger picture, and he happily gets to work converting the dirt into rich soil. Freedman demonstrates how one tiny creature can make a big difference and is an important part of an ecosystem. Her simple storytelling is supported by fabulous illustrations, created with watercolor and pencil, that cut away to show Carl underground—the text following his undulating path. Vibrant greens and softly rendered animals populate the surface terrain, upon which Carl appears as an adorable squiggle. This spare but endearing story will help youngsters understand the wonder and interconnectedness of nature. Preschool-Grade 2. Copyright 2019 Booklist Reviews.

Freedman introduces Carl by telling readers what he is not: "Carl was not a bird" (nor a bear, nor a beaver). Carl is an earthworm, and he lives underneath the other forest animals. A cross-section of soil shows Carl next to a curling line of type describing his daily activities: "burrowing, tunneling, digesting dead leaves... turning hard dirt into fluffy soil." When a field mouse asks him why he does what he does, Carl's search for answers keeps him away from his work, and the earth dries up around him. "I can't find any grubs!" cries a ground beetle. With that, Carl understands his purpose. Freedman's spreads shows how tiny organisms help to keep the natural world in balance in this inventive worm's-eye view of the web of life. Ages 3–5. (Apr.) Copyright 2019 Publishers Weekly.

PreS-Gr 2—Carl is an earthworm who spends his day tunneling through the soil. When a field mouse asks him why he does what he does, Carl realizes that he does not know—but he is determined to find out. Carl visits with Bear, Rabbit, Fox, and others who are aware of their own purposes, but not Carl's. It takes a tiny ground beetle to enlighten him. Nature-inspired watercolor illustrations are gentle and inviting. The text appears in a simple black font, complementing the artwork. When Carl is busy at his job, the text is white against the brown earth and meanders across the pages, following Carl's tunneling track. Tiny black eyes and communicative postures express the attitudes of Carl and the other animals. But on the last page, when Carl finally learns his raison d'etre, readers also see a hint of his satisfied smile. VERDICT This book is a poignant example of the important contributions of even the smallest creature, but it's better than that—it's a science lesson as well. Freedman subtly explains the delicate balance of nature and each creature's role in maintaining it. Carl is an endearing protagonist.—Lisa Taylor, Florida State College, Jacksonville Copyright 2019 School Library Journal.

When a field mouse asks Carl the earthworm why he tunnels through the dirt, Carl doesn't have an answer, so he sets off to find out.

Carl the earthworm happily digs tunnels in the soil until one day he questions why he does what he does, and goes in search of an answer, asking one animal after another.

Happily tunneling in the soil until the day he is challenged by a field mouse, an earthworm meets other forest animals and learns about their respective purposes before discovering that he is making a difference just by being himself. Simultaneous eBook.

From the often Caldecott-buzzed Deborah Freedman, a sweet and funny story about finding your place in the world.Carl is an earthworm. He spends his days happily tunneling in the soil until a field mouse asks him a simple question that stops him short: "Why?" Carl's quest takes him on an adventure to meet all the animals of the forest, each of whom seems to know exactly what they were put on this earth to do, unlike the curious Carl. But it's not until the world around him has changed that Carl begins to realize everyone, no matter how small, makes a big difference just by being themselves.