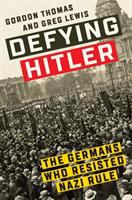 *Starred Review* This carefully researched book challenges the myth that the German people were virtually unanimous in support of Hitler. An interlocking network of anti-Hitler groups and individuals spent years trying to undermine the regime, surreptitiously distributing literature and plotting sabotage and even assassination attempts. By doing so, they risked dire consequences: beatings, imprisonment, death. While the identities of some of these resisters are now widely known, especially in Germany, many—of various political stripes—have remained anonymous. The late Thomas and coauthor Lewis have meticulously gathered information about all those who defied Hitler and memorialize them here. They include siblings Sophie and Robert Scholl; Arvid Harnack and his wife, the American Mildred Fish-Harnack; clergy such as Dietrich Bonhoeffer; Herbert Baum and his circle of Jews and non-Jews; and military officials such as Hans Oster, Harro Schulze-Boysen, Admiral Wilhelm Canaris, and Claus von Stauffenberg, who organized the nearly successful attempt on Hitler's life. The most chilling portrait here is that of committed anti-Nazi Kurt Gerstein. His deliberately chosen role as a gestapo officer forces him to take part in mass exterminations, described in horrifying specificity, which he attempts futilely to delay or avoid. Defying Hitler is filled with almost unbearable suspense and drama. It demonstrates the truth of the book's epigraph, from the poet Albrecht Haushofer: "There are times when madness reigns, and then it is the best who hang." Copyright 2019 Booklist Reviews.

Lewis (Shadow Warriors of World War II) and the late Thomas (Gideon's Spies) have crafted a well-researched volume that drills into the darkness to examine the lives of those within Third Reich who actively defied Hitler's orders from 1933 to 1945, chronicling the major resistance movements such as the White Rose movement and Valkyrie plots as well as lesser-known subversions within the military intelligence circles. The resistance came from all circles of German life and ideological bends and this volume highlights the connections among those resistors, many of whom knew that the end of the Third Reich meant Germany's destruction. VERDICT Highly recommended for those wishing to comprehend life in Nazi Germany and what courage it took not to surrender to authority. This masterful work will best serve general audiences and historians alike. [See Prepub Alert, 10/15/18.]—Jacob Sherman, John Peace Lib., Univ. of Texas at San Antonio Copyright 2019 Library Journal.

Journalists Thomas and Lewis (Shadow Warriors of World War II: The Daring Women of the OSS and SOE) provide an engrossing and accessible history of Germans who risked, and mostly lost, their lives opposing the Nazi regime, effectively countering the idea that "the German people followed Hitler as if one mass." The authors interweave stories of heroic acts of defiance by academics, blue-collar workers, and military service members, beginning their protagonists' stories before WWII, as with Mildred Fish, a Wisconsin teacher who married visiting German student Arvid Harnack; she helped organize an anti-fascist underground in Berlin, while he became a senior official at the German Ministry of Economics who leaked information about the Nazis to the Americans. Readers familiar with movements such as the White Rose and the various conspiracies to assassinate Hitler will appreciate having them placed in a broader context. The authors rely on both primary and secondary sources, although their sourcing, as when they reconstruct the thoughts of White Rose leader Sophie Scholl, is not consistently robust. Despite a paucity of insight into what led a few Germans to oppose the Nazis when the vast majority of their countrymen did not, this volume is an informative counterpoint to accounts of widespread German complicity with the Holocaust. (Apr.) Copyright 2019 Publishers Weekly.

A chronicle of the underground resistance efforts of ordinary Germans who thwarted Nazi rule shares the stories of heroes who risked or lost their lives to speak out, smuggle intelligence, defy wrongful laws, and help Jewish escapees.

A vivid chronicle of the underground resistance efforts of everyday Germans who thwarted Nazi rule shares the stories of heroes who risked or lost their lives to speak out, smuggle intelligence, defy wrongful laws and help Jewish escapees. Illustrations.

A vivid chronicle of the underground resistance efforts of everyday Germans who thwarted Nazi rule shares the stories of heroes who risked or lost their lives to speak out, smuggle intelligence, defy wrongful laws and help Jewish escapees.

"A terrifying and timely account of resistance in the face of the greatest of evils.''Alex Kershaw, New York Times bestselling author of The First WaveAn enthralling story that vividly resurrects the web of everyday Germans who resisted Nazi ruleNazi Germany is remembered as a nation of willing fanatics. But beneath the surface, countless ordinary, everyday Germans actively resisted Hitler. Some passed industrial secrets to Allied spies. Some forged passports to help Jews escape the Reich. For others, resistance was as simple as writing a letter denouncing the rigidity of Nazi law. No matter how small the act, the danger was the same--any display of defiance was met with arrest, interrogation, torture, and even death.Defying Hitler follows the underground network of Germans who believed standing against the Fuhrer to be more important than their own survival. Their bravery is astonishing--a schoolgirl beheaded by the Gestapo for distributing anti-Nazi fliers; a German American teacher who smuggled military intel to Soviet agents, becoming the only American woman executed by the Nazis; a pacifist philosopher murdered for his role in a plot against Hitler; a young idealist who joined the SS to document their crimes, only to end up, to his horror, an accomplice to the Holocaust. This remarkable account illuminates their struggles, yielding an accessible narrative history with the pace and excitement of a thriller.