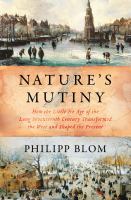 "The hints of an impending environmental crisis appeared as early as the 1570s, as winters grew colder and crops diminished. By the turn of the seventeenth century, the temperature had plummeted so drastically that Mediterranean harbors were covered with ice, birds were dropping frozen out of the sky, and enterprising Londoners erected semipermanent frost fairs on a frozen Thames--with bustling kiosks, taverns, and even brothels. Chronicling the dramatic turmoil and the long-lasting consequ...ences of this 'Little Ice Age,' best-selling historian Philipp Blom reveals how a new, radically altered Europe emerged out of environmental cataclysm. Showing how the drastic weather patterns decimated entire harvests across the European continent, [this book] describes how populations fled the starvation and civil unrest in the countryside to bourgeoning urban centers, where the emergence of early capitalistic markets sparked the transformation of European cities. The political and cultural ramifications were no less drastic. Moving from political to intellectual events and to the arts, Blom evokes the era's most exquisite paintings, like Hendrick Avercamp's surreal depiction of an idyllic community on the ice in Winter Landscape, as well as the revolutionary ideas of Enlightenment figures, who, like Montaigne in his Essais, imagined novel worldviews to cope with what seemed like nature's vicious scourge against humankind. Now, as we face a climate crisis of our own, Blom offers exigent ways of understanding this history of the 'Little Ice Age' in light of our own society's fraught relationship with the environment. 'There must be hope,' Blom concludes, but only if we are willing to learn from the past. Ultimately, [this book] offers an essential parable of how societies struggle to survive when violent environmental changes threaten the very fabric of their civilization."--Dust jacket.