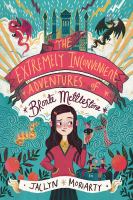 Bronte is ten years old when she receives a letter saying that her long-absent parents have been killed by pirates, and the lawyers tell her that their will (reinforced with serious magic) requires her to deliver gifts to her ten other aunts (not Aunt Isabelle, whom she lives with), and to start the trip immediately and alone--but as she travels the kingdoms, she begins to suspect that there is more to this journey than delivering treasures, and that her parents had more secrets than she ever re...alized.

As an infant, Bronte was left in Aunt Isabelle's care by her mother and father, who have not been heard from since. Ten years later, Isabelle and Bronte receive word that pirates have killed her parents. Their eccentric will compels their daughter to make a solo journey to visit each of her other 10 aunts and deliver a different present to each one. Along the way, Bronte discovers her many aunts and cousins, several new friends, and a secret mission. Combining events such as the rescue of a baby floating downriver in a basket, meetings with water sprites, and an avalanche, Bronte's journey takes many unexpected twists and has consequences rippling out far beyond her extended family. A strong-minded girl who constantly struggles to do the right thing, Bronte makes a likable heroine and an amusing narrator who offers colorful characters, lively conversations, and insightful reflections. Her eventful story, seemingly as delicate as gossamer, yet strong as silk, is well structured and entertaining. An episodic, high-spirited tale of adventure and magic. Grades 4-6. Copyright 2018 Booklist Reviews.

At age 10, Bronte Mettlestone receives a telegram stating that her parents have been killed by pirates. She doesn't remember them, however, having been raised by her loving Aunt Isabelle and the butler. In her parents' will (bound by "faery cross-stitch") is the stipulation that she travel alone and deliver gifts to her 10 aunts. If she fails, her hometown will be in trouble. Despite the danger of running into dark mages, she begins her quest, which reads like a string of dreams. While visiting Aunt Sue, Bronte is awarded the Elvish Medal for Bravery for rescuing a baby from the river. She then saves wrongly accused Aunt Emma (who's been imprisoned for stealing a water sprite's pepper grinder), rides dragons with Aunt Sophy, and the list goes on. Bronte's voice is more chatty than charming, and readers may feel frustrated that Moriarty (A Tangle of Gold) reveals details of Bronte's history and powers only toward the end, when it feels like an afterthought. Still, the back-to-back adventures make for a speedy plot that will keep readers turning the pages. Ages 8–12. (Oct.) Copyright 2018 Publishers Weekly Annex.

Gr 4–6—For 10 years, Bronte Mettlestone has led a perfectly happy life under the care of her Aunt Isabella and her butler while her parents, whom Bronte has never met, have been off on fabulous adventures. Until, that is, the day a telegram arrives announcing their untimely death at the hands of marauding pirates. In their will, Bronte's parents leave her a highly detailed set of instructions, sending her on a rollicking journey by herself across the Empires and Kingdoms to deliver very specific gifts to her father's 10 other sisters at very specific times. What's worse, the will has been enforced with faery cross-stitch, meaning Bronte must follow the instructions to the letter or risk her hometown of Gainsleigh being destroyed. As Bronte sets off, savvy readers will suspect that there may be more going on than she realizes. Along with a litany of (mostly) delightful aunts, Bronte encounters everything from water sprites to dragons to dark mages, culminating in revelations about her true family history. Bronte's world and the people inhabiting it sport a charming anachronism and poignant insight that are sure to delight fans of fantasy adventures like Catherynne Valente's The Girl Who Circumnavigated Fairyland in a Ship of Her Own Making and Trenton Stewart's The Mysterious Benedict Society, while the story's clipping pace and well-constructed mysteries, which will leave readers guessing until the very end, make this an excellent recommendation for any fantasy fan. VERDICT This quirky and endearing adventure set in a captivating, off-beat world is an excellent purchase wherever fantasy circulates well.—Darla Salva Cruz, Suffolk Cooperative Library System, Bellport, NY Copyright 2018 School Library Journal.

When Bronte Mettlestone learns that her parents have been killed by pirates, she is tasked by their will to deliver gifts to her ten aunts, but as she travels the kingdoms, she begins to suspect that there is more to this journey than she realized.

Bronte is ten years old when she receives a letter saying that her long-absent parents have been killed by pirates, and the lawyers tell her that their will (reinforced with serious magic) requires her to deliver gifts to her ten other aunts (not Aunt Isabelle, whom she lives with), and to start the trip immediately and alone--but as she travels the kingdoms, she begins to suspect that there is more to this journey than delivering treasures, and that her parents had more secrets than she ever realized.

Jaclyn Moriarty returns with her first middle-grade novel, a buoyantly high-spirited fantasy adventure.Bronte Mettlestone is ten years old when her parents are killed by pirates.This does not bother her particularly: her parents ran away to have adventures when she was a baby. She has been raised by her Aunt Isabelle, with assistance from the Butler, and has spent a pleasant childhood of afternoon teas and riding lessons. Now, however, her parents have left detailed instructions for Bronte in their will. (Instructions that, annoyingly, have been reinforced with faery cross-stitch, which means that if she doesn't complete them, terrible things could happen!) She travels the kingdoms, perfectly alone, delivering gifts to ten other aunts: a farmer aunt who owns an orange orchard, a veterinarian aunt who specializes in dragon care, a pair of aunts who captain a cruise ship, and a former rock star aunt who is now the reigning monarch of a small kingdom.But as she travels from aunt to aunt, Bronte suspects there might be more to this journey than the simple delivery of treasure.