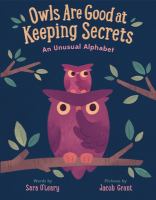 Owls are good at keeping secrets An unusual alphabet

*Starred Review* The end pages hint at the nature of this alphabet book, which, in its subtitle, is rightly referred to as unusual. Animals, who are hiding behind each letter of the alphabet, are revealed as we explore the book. They, the key characters and true focus of the journey, have attributes that most children will recognize: Alligators, who make an appearance for the letter A, think you'd like them if you got to know them, while zebras, who bring up the rear with Z, really would like to be first just once. Most children giggle at their own jokes the way Y's yaks do, and like W's wolves, many prefer not to be told to smile. While most of the animals, like giraffes and foxes, will be children's favorites, others (iguanas, jellyfish, meerkats) might be a bit new to them. Grant's illustrations focus on the featured animal and its antics, with no other distracting background—­we see a curious hedgehog looking through a telescope, or an X-ray fish looking cool. The end pages have full disclosure, with each animal standing by its letter and an added opportunity for conversation or a memory game. Pair with Z Is for Moose (2012), by Kelly Bingham and Paul O. Zelinsky, for another fun alphabet romp. Preschool-Kindergarten. Copyright 2018 Booklist Reviews.

Animal characters with idiosyncratic traits are the subjects of O'Leary's sweet and silly alphabet book. Grant illustrates in a quiet, fetching style: for the letter H, a hedgehog points a telescope toward the stars: "Hedgehogs can't help being curious." For I, a homesick iguana sits wide-awake at a sleepover. Elsewhere, a narwhal contentedly paints a self-portrait on the surface of an ice floe: "Narwhals can be perfectly happy all alone." Other animals include toads, which "are terrific at tongue twisters"; voles (they "always want just one more book"); and wolves, which "don't like being told to smile" for photographs. Readers won't learn factual details about the animals, but they will happily play along with O'Leary's funny fibs. Ages 3–7. (Dec.) Copyright 2019 Publishers Weekly.

PreS-K—A wide array of animals in unlikely yet interesting situations. "A" is for Alligators, who, "…think you'd like them if you got to know them," and "Z" for Zebras "…would like to be first. Just once." It is true that lions do like a nice nap, but the majority of scenarios range from silly to outright absurd in terms of animal behavior. On the other hand, they refer to the wants and needs of little ones. Just like bears, children "…want their mothers to kiss it better; " like chipmunks, they "…love to stay up past bedtime." Some are downright amusing: "Jellyfish don't care if you think they look funny when they dance." Grant's illustrations, all in soft, subtle shades of pink, olive green, and browns, are as endearingly gentle as a lullaby. It is also useful that uppercase and lowercase letters are presented together. The colors of the images are somewhat subtle, but this does not detract from the overall appeal to many young children learning their ABCs while being introduced to some new and commonplace animals. VERDICT A strong choice that could potentially be used to inspire children to create their own animal alphabet books, whether factual, silly, or both, particularly after a group storytime.—Etta Anton, Yeshiva of Central Queens, NY Copyright 2018 School Library Journal.

A delightful book of curious, little-known "facts" about animals--one for each letter of the alphabet!Did you know that chipmunks love to stay up past their bedtime? Or that dragons cry at happy endings? I bet you'd never have guessed that iguanas sometimes get homesick at sleepovers.Sara O'Leary pulls back the curtain on the animal world and gives us an absolutely charming little one-line "fact" about one animal for each letter of the alphabet. Kids will love to see their own quirks reflected in these adorably rendered creatures, and perhaps will be comforted to know that--just like them--narwhals can be perfectly happy all on their own and quail also get tired of being told to be quiet.This is more than just an alphabet book. It's a charming, hilarious, and touching look at the diversity of personalities in the world--worth many, many rereads.