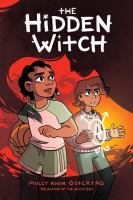 When Aster's non-magical friend Charlie finds herself the target of a curse, Aster and his unconventional talent for witchery must find the source of the curse before more people get hurt.

In the sequel to The Witch Boy (2017), Ostertag continues the story of Aster, the boy who chooses to be a witch, a role traditionally held by girls. Aster is continuing his studies, but he feels like he has a lot to learn, so he agrees to be tutored by his grandmother in exchange for helping with her brother, Mikasi, the beast who attacked Aster and his cousins. He's also dealing with a dark and serious magic that has attached itself to his friend, Charlie. Will he be able to help Mikasi without losing himself? Will Mikasi end up helping Aster in return with the dark magic surrounding Charlie? Ostertag's illustrations are vivid and vibrant and showcase the degrees of magic in beautiful, rich tones. The panels are well positioned, making it easy to follow the story. In her dynamic artwork, the detailed scenes spanning across pages showcase the richness of her world building. A great comic for magic fans and those who want to read stories about others who buck the trend. Grades 3-7. Copyright 2019 Booklist Reviews.

Gr 4-6–In this adventurous sequel to The Witch Boy, Aster is finally allowed to learn witchery alongside the girls in his family, while his best friend Charlie is excited by the prospect of a new friendship at (nonmagic) school with shy, guarded Ariel. But mysterious happenings pick up quickly when Charlie is visited by a malevolent spirit and when magic meddles in her first basketball game. Meanwhile, in return for extra lessons, Aster helps his grandmother heal the monster who endangered his life and who, deep down, is also his great-uncle Mikasi. Ostertag skillfully develops the setting and action while tackling topics such as friendship, jealousy, bullying, and identity. Themes of embracing differences and the long-term effects of intolerance carry over from the previous installment, as readers are introduced to a diverse, expanding cast. The bold art is inviting; clear-cut, brightly colored panels with warm autumnal tones keep scenes moving and shift into muted shades to enhance the creep factor. Depictions of Mikasi's dragon-esque form and foreboding shadow shapes are the perfect level of spooky for the target audience. VERDICT An exciting continuation of Aster's supernatural journey, whose coming-of-age messages will resonate with middle graders.—Ashleigh Williams, School Library Journal Copyright 2018 School Library Journal.

From the creator of the acclaimed graphic novel The Witch Boy comes a new adventure set in the world of magic and shapeshifting -- and ordinary kids just trying to make friends.

From the creator of the acclaimed graphic novel The Witch Boy comes a new adventure set in the world of magic and shapeshifting -- and ordinary kids just trying to make friends.Aster and his family are adjusting to his unconventional talent for witchery; unlike the other boys in his family, he isn't a shapeshifter. He's taking classes with his grandmother and helping to keep an eye on his great-uncle whose corrupted magic wreaked havoc on the family. Meanwhile, Aster's friend from the non-magical part of town, Charlie, is having problems of her own -- a curse has tried to attach itself to her. She runs to Aster and escapes it, but now the friends must find the source of the curse before more people -- normal and magical alike -- get hurt.