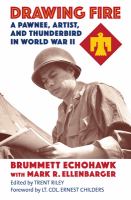 "In 1940, at the age of seventeen, Pawnee Indian artist Brummett Echohawk (1922-2006) enlisted in the 45th Infantry Division--the "Thunderbirds"--Part of the Oklahoma Army National Guard in his home town of Pawnee, Oklahoma. General George Patton told the 45th that they were "one of the best if not the best division in the history of American arms." Drawing Fire, Echohawk's memoir of his military service, tells the epic true story of a young Pawnee artist serving in... a unit composed largely of Native Americans during some of the most significant battles of the Second World War, including Sicily, Salerno, and Anzio. Woven into the tapestry of Drawing Fire are Pawnee legends, language, and American Indian humor, all which offer a rare glimpse of the Native American experience in Europe during World War II. The book is supplemented by more than 40 combat sketches Echohawk made during the war. The foreword is by WWII veteran, Medal of Honor recipient, and Muscogee (Creek) Indian Lt. Col. Ernest Childers"--Provided by publisher.