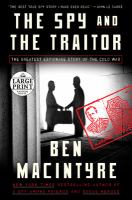 Traces the story of Russian intelligence operative Oleg Gordievsky, revealing how his secret work as an undercover MI6 informant helped hasten the end of the Cold War.

1st floor Show me where

*Starred Review* Pick up any current true-crime spy book and you'll probably see a version of this phrase on the cover: "The Greatest Spy Story Ever Told." Most of them don't live up to the billing, but the latest by Ben Macintyre, author of several nonfiction spy tales (Double Cross, 2012), comes close. This is the biography of Colonel Oleg Gordievsky, who served both as a KGB career operative, rising to an elite position in London, and as a spy for Britain's intelligence agency, MI6. What makes this read propulsive is the way Macintyre tells the story almost as a character-driven novel, showing Gordievsky's disillusionment—when, as a young KGB agent, he witnessed the building of the Berlin Wall—and his subsequent psychological shake-up when he was posted to Copenhagen and fell in love with freedom, making him ripe for recruitment as a British spy (and leading to his foiling of Soviet plots against the West). Macintyre's way with details, as when he explains exactly how the KGB bugged apartments, or when he delves into KGB training, is utterly absorbing. The action is punctuated with plenty of heart-stopping near-discoveries, betrayals, and escapes. Fascinating, especially now. Copyright 2018 Booklist Reviews.

Veteran nonfiction writer Macintyre (writer at large, The Times of London; A Spy Among Friends) tells the story of Oleg Gordievsky (b. 1938), a spy for the Soviet Union beginning in the 1960s, later becoming the chief spy in the KGB's London office. Over time, Gordievsky developed leanings toward the West and spied for England's MI6 secret service. The CIA, meanwhile, wanted desperately to find out the name of this important double agent. Little did the CIA or MI6 know, however, that Aldrich Ames, the man leading the CIA's counterintelligence, was actually working for the Soviet Union. Gordievesky's actions helped the West win the Cold War as they contributed to the hindrance of Soviet plots and exposed agents working in both Great Britain and the United States. Macintyre's many interviews with Gordievsky and other officials in the intelligence community related to this time period add to the story. It concludes with a list of codenames, aliases, references, and an index. VERDICT Fans of narrative nonfiction, the Cold War, spy stories, foreign relations among the United States, England, and Russia, and Macintyre's previous works will greatly enjoy this incredible true account.—Jason L. Steagall, formerly with Gateway Technical Coll. Lib., Elkhorn, WI Copyright 2018 Library Journal.

Macintyre (Rogue Heroes) recounts the exploits of Oleg Gordievsky, the KGB agent turned British spy responsible for "the single largest ‘operational download' in MI6 history," in this captivating espionage tale. Building on in-depth interviews and other supplementary research, Macintyre shows Gordievsky expertly navigating the "wilderness of mirrors" that made up the daily existence of a Cold War spy—passing microfilm, worrying that his wife will turn him in to the KGB, battling an unexpected dosage of truth serum. In Macintyre's telling, Aldrich Ames, the CIA agent turned KGB operative who gave up Gordievsky's cover, functions as a foil and a vehicle for moral comparison between the KGB and MI6. In a feat of real authorial dexterity, Macintyre accurately portrays the long-game banality of spycraft—the lead time and persistence in planning—with such clarity and propulsive verve that the book often feels like a thriller. The book has a startling relevancy to the news of the day, from examples of fake news to the 1984 British elections in which "Moscow was prepared to use dirty tricks and hidden interference to swing a democratic election in favor of its chosen candidate." Macintyre has produced a timely and insightful page-turner. (Sept.) Copyright 2018 Publishers Weekly.

Traces the story of Russian intelligence operative Oleg Gordievsky, revealing how his secret work as an undercover MI6 informant helped hasten the end of the Cold War.

The New York Times best-selling author of A Spy Among Friends and Rogue Heroes traces the story of Russian intelligence operative Oleg Gordievsky, revealing how his secret work as an undercover MI6 informant helped hasten the end of the Cold War. Simultaneous.

NEW YORK TIMES BESTSELLER • The celebrated author of Double Cross and Rogue Heroes returns with his greatest spy story yet, a thrilling Americans-era tale of Oleg Gordievsky, the Russian whose secret work helped hasten the end of the Cold War.

“The best true spy story I have ever read.”—JOHN LE CARRÉ

If anyone could be considered a Russian counterpart to the infamous British double-agent Kim Philby, it was Oleg Gordievsky. The son of two KGB agents and the product of the best Soviet institutions, the savvy, sophisticated Gordievsky grew to see his nation's communism as both criminal and philistine. He took his first posting for Russian intelligence in 1968 and eventually became the Soviet Union's top man in London, but from 1973 on he was secretly working for MI6. For nearly a decade, as the Cold War reached its twilight, Gordievsky helped the West turn the tables on the KGB, exposing Russian spies and helping to foil countless intelligence plots, as the Soviet leadership grew increasingly paranoid at the United States's nuclear first-strike capabilities and brought the world closer to the brink of war. Desperate to keep the circle of trust close, MI6 never revealed Gordievsky's name to its counterparts in the CIA, which in turn grew obsessed with figuring out the identity of Britain's obviously top-level source. Their obsession ultimately doomed Gordievsky: the CIA officer assigned to identify him was none other than Aldrich Ames, the man who would become infamous for secretly spying for the Soviets.

Unfolding the delicious three-way gamesmanship between America, Britain, and the Soviet Union, and culminating in the gripping cinematic beat-by-beat of Gordievsky's nail-biting escape from Moscow in 1985, Ben Macintyre's latest may be his best yet. Like the greatest novels of John le Carré, it brings readers deep into a world of treachery and betrayal, where the lines bleed between the personal and the professional, and one man's hatred of communism had the power to change the future of nations.