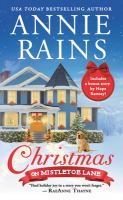 "This USA Today bestselling author invites you to the delightful small town of Sweetwater Springs where the magic of Christmas brings to strangers together in this "story you won't forget" (RaeAnne Thayne, New York Times bestselling author). Christmas is coming to the North Carolina mountains, and the air is fresh and crisp and filled with promise. After the devastating loss of her job in the big city, the small town of Sweetwater Springs feels like heaven to Kaitlyn Russo. S...he's inherited her grandparents' charming (if a little rundown) bed and breakfast, and it's just the new lease on life she needs. Only "heaven" comes with a catch-and a handsome and completely infuriating one at that. After what he hopes will be a quick trip, Mitch Hargrove wants nothing more than to put his hometown in the rearview mirror. But his plans get derailed when he learns he's now half-owner of the Sweetwater B&B. The fact that he's given only two months to make the inn a success is a huge problem, but it's his pretty-and incredibly headstrong-partner who's the real challenge. With the holiday fast approaching and a grand re-opening looming, will Mitch keep running from the ghosts of Christmas past . . . or will he realize the true gift he's been given? Includes the bonus short story "Midnight Clear" by Hope Ramsay!" --