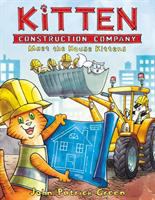 Marmalade, a trained architect who also happens to be an adorable kitten, finds allies in other construction-trade cats when her plans for the new mayor's mansion are rejected by the city planner.

Chief architect Marmalade (an orange tabby) and her team of adorable house cats, having proved themselves by building the mayor's new mansion (Kitten Construction Company: Meet the House Kittens, 2018), are contracted to replace the old Mewberg bridge. Their plans move forward until masonry and lumber expert Professor Von Wigglebottom (a Siamese) reminds Marmalade that bridges are, in fact, built over water, which sends her into a panic. Despite the best efforts of their fearless plumber, Bubbles (a white Persian), the cats are forced to outsource help. Enter Carl Barks and his canine crew of Demo Doggos—much to Marmalade's distaste. Continuing his playful premise, Green delivers another gentle, hilarious tale rife with the kind of interspecies competition that both cat- and dog-lovers will revel in, though the real winners here are the punsters, who will gorge on a veritable feast of wordplay. The art remains colorful and slightly cartoonish—these animals are animals, despite being intelligent and able to use tools—and pages fit at most two panels, making this an excellent choice for graphic novel newbies. Grades 2-4. Copyright 2019 Booklist Reviews.

Gr 1–3—Don't be fooled by the smiling kittens in construction hats adorning the cover—this lighthearted graphic novel doles out an important message about the dangers of judging by appearances. Marmalade the cat has a degree in architecture and a well-thought-out design for the mayor's mansion. But the city planner won't hire her—after all, such a coveted job can't go to "a cute little kitten." Joined by two other felines, Sampson, an aspiring engineer, and Bubbles, who longs to be a plumber, Marmalade starts her own construction crew, and the foreman in charge of the mayor's mansion agrees to let them work on the project. The cats point out that the architectural plans are dangerously flawed, but they're merely greeted with a chorus of "So adorable!" So Marmalade and her pals decide to build their own mansion and prove their mettle. Green's artwork is attractive, though a little static. Cleanly illustrated panels are loaded with humor that, though a little sophisticated in places, is still satisfying—few readers, young or old, will be able to keep a straight face upon meeting Professor von Wigglebottom. And while Green is never preachy, the warning against making snap assumptions comes through loud and clear. VERDICT A delightful addition to graphic novel shelves.—Mahnaz Dar, School Library Journal Copyright 2018 School Library Journal.

Gr 2–4—In the first series installment, the House Kittens gained the trust of the city after working on the mayor's mansion. Now the cats' work on the Mewburg stadium is nearing completion, and Marmalade and her crew have been offered an exciting new gig. A local bridge is falling apart, and a new one needs to be built. Who better than the House Kittens to take on the job? The cats don't take into account that building a bridge means working near water, and only Bubbles, the plumber cat, is comfortable with that. Marmalade sends Bubbles out to lead the crew, but it's not long before the kittens are behind schedule. Additional help is required, and at last they resort to working with the Demo Doggos. Tensions mount as the two teams clash, until Marmalade concedes that she wrongly assumed that dogs aren't as capable as cats. The message of the importance of giving others a fair shake and refraining from snap judgments is clear but not preachy. There are plenty of puns, and visual humor abounds, like when a cat knocks the microphone off the podium during a press conference. Green's illustrations are adorable and easy to follow, making this title a good pick for burgeoning comics fans. VERDICT This graphic novel strikes a balance between funny and heartfelt. It's paws-itively a great buy for most collections.–Gretchen Hardin, Bee Cave Public Library, TX Copyright 2019 School Library Journal.

All Marmalade wants to do is build things.She is, after all, a trained architect.She’s also a distractingly adorable kitten. Fed up with not being taken seriously because she's so cute, Marmalade bands together with a handful of other aspiring builders—all of them kittens. But in a world where humans call the shots, can the Kitten Construction Company prove their worth . . . without giving up the very things that make them kittens? (Don't worry, dear reader, the answer is definitely "yes"!)