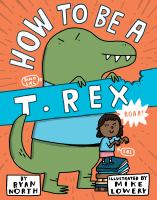 Tyrannosaurus Rex enthusiast Sal transforms herself into an uncontrollable T. Rex, partly because her brother said it would be impossible, but soon discovers the downsides of always being fierce.

With all the subtlety of an attack by the titular dinosaur, North and Lowery envision a child's fervent wish to be transformed into a T. rex coming true, and then, after letting her revel briefly in the sheer awesomeness of acting out, lead her to the realization that there are downsides to being loud, rude, and pushy. Sent to her room after various offenses, and eventually showing at least a little contrition for being a "Tyrannojerkus Rex" at home and on the soccer pitch, the dark-skinned child in Lowery's bright, loosely drawn cartoon scenes transforms herself into "an ultimate dino-human hybrid!"—able to keep her inner theropod alive (unleashing it during a match and booting the ball right through the net) while mending fences with teammates and even drawing a compliment from her mocking big brother. The hand-lettered narrative is wordy but big and emphatic, just like the art and, for that matter, the lesson. Young wild things fond of Bob Shea's Dinosaur vs. series might find toothsome food for thought here. Grades 1-3. Copyright 2018 Booklist Reviews.

North (Romeo and/or Juliet) and Lowery (Random Illustrated Facts) give T. rex a fresh twist by asking what the toothy theropod can teach children about harnessing great power for good. Brown-skinned Sal wishes she was a T. rex, but a visual accounting shows that she just isn't, at least right now: "Teeth: okay, could be pointier." "Body: Tiny, often ignored." With hilarious ease, Sal soon turns into a tyrannosaur merely by sitting up in bed at night and concentrating. Now she tastes power: "No door can hold you! You can eat whatever you want!" But living as a T. rex among humans demands compromise. "They don't like it when you eat their food." Is it possible to maintain a dinosaur-style sense of one's own awesomeness and live with other humans? It is, Sal learns. "I don't let people ignore me or push me around, but I'm careful not to stomp on any humans." Lowery's unsteady lettering and goofy human figures with bean-shaped noses contribute to the book's laughs and help keep its stay-strong lesson from descending into sentimentality. Ages 4–8. (Aug.) Copyright 2018 Publishers Weekly.

Tyrannosaurus Rex enthusiast Sal transforms herself into an uncontrollable T. Rex, partly because her brother said it would be impossible, but soon discovers the downsides of always being fierce.

An Eisner Award-winning writer makes his picture book debut with this bright, bold and quirky story about finding--and taming--the beast within, as Sal decides she is not going to be a teacher or doctor or lawyer when she grows up--she is going to be an awesome Tyrannosaurus rex! Simultaneous eBook.

An upROARiously funny take on following your wildest dreams, from the bestselling creator of Dinosaur ComicsBeing a regular old human is kind of a drag. That's why Sal is not going to be a teacher or doctor or lawyer when she grows up. She is going to grow up to be an awesome Tyrannosaurus Rex. Her brother thinks it's impossible, but Sal sure shows him! And in the beginning, being a T. Rex is AWESOME. But did you know that it's kind of hard to make friends when you are a super-giant, super-loud, super-stompy dinosaur? If only there were a way for Sal to be 100% awesome, 100% of the time...Eisner Award-winning writer Ryan North makes his picture book debut with this bright, bold, and quirky story about finding--and taming--the beast within.