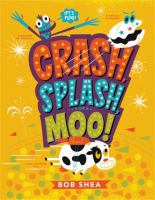 Mr. McMonkey hosts a game in which the reader is invited to guess whether a stunt will result in a crash, a splash, or a moo.

In this spoof of televised reality competitions, host Mr. McMonkey invites readers to win prizes (delicious bananas) by guessing whether two contenders, Action Clam and Cow, will crash, splash, or moo when performing awesome stunts. Action Clam races a car into blocks (he crashes) and shoots out of a cannon into a really faraway glass of water (he splashes), while Cow skateboards through a loop-the-loop and motorcycles over buses (he moos for each). Both vie for the big one, which involves a rocket pack, a piñata, and a vat of butterscotch pudding. The flashy cover, which prominently features the odd but enthusiastic characters, is designed to draw readers in, while Mr. McMonkey's enticing mentions of a secret prize will hook them. The hyperbolic text consists of Mr. McMonkey's short, play-by-play descriptions, and the action-filled illustrations, which pop on the yellowish-gold pages, make this a strong candidate for a read-aloud. Readers will be encouraged to channel their inner Carson Daly, and eager audiences will want to invent awesome competitions of their own. HIGH-DEMAND BACKSTORY: The ever-prolific Shea (The Scariest Book, 2017) has churned out another high-energy picture book sure to be in demand during storytimes. Preschool-Grade 2. Copyright 2018 Booklist Reviews.

In his characteristic cartoon-style illustrations, Shea (the Ballet Cat series) creates an energetic game show in which readers become players. Choosing from one of the three words in the title, they must guess what will happen when a foolhardy "Action Clam" and a phlegmatic cow perform daredevil stunts. One frenzied Mr. McMonkey hosts (Shea wisely asks audience members to "raise their hands" rather than shout out their guesses), awarding bananas for each right answer. A big part of the joke is that the game involves almost no suspense: Action Clam takes on anything that ends in "crash" or "splash," while the cow, set up to perform amazing feats, stays put and says "moo." But with the help of a jet pack, the two performers join forces for a final stunt that achieves a sort of literary hat trick. As characters, typography, and jokes bounce around the pages—bright, silly, and loud—this one proves itself banana-worthy. Ages 4–8. Agent: Steven Malk, Writers House. (Sept.) Copyright 2018 Publishers Weekly.

PreS-Gr 2—Set up like a game show, Shea's latest humorous picture book asks participants to raise their hands and vote (CRASH!, SPLASH!, or MOO! are the options) for the outcome of stunts done by an Action Clam and Cow. Narration is done by an energetic host named Mr. McMonkey, and the prizes include bananas and a top secret end-of-the-book prize. The digital illustrations are as silly, unpredictable, and action-packed as the story line. It is impossible not to have fun while reading or listening to this zany story. VERDICT The elements of interactivity make this a great storytime read-aloud. This story is also full of classroom extension possibilities, including activities involving new stunts and outcomes. Kids will line up for a chance to play.—Tanya Boudreau, Cold Lake Public Library, Alta. Copyright 2018 School Library Journal.

A lively picture book presented in the style of a game show introduces host Mr. McMonkey and a trio of unlikely daredevil contestants who face off in a zany sequence of challenges while inviting readers to guess the outcomes of their wacky stunts. 35,000 first printing. Simultaneous eBook.

Mr. McMonkey hosts a game in which the reader is invited to guess whether a stunt will result in a crash, a splash, or a moo.

Calling all daredevils! It's time to play CRASH, SPLASH, OR MOO! in this boisterous picture book with all the excitement of a game show. Mr. McMonkey is your host, and your contestants are America's favorite stunt clam, Action Clam...and a cow! These unlikely daredevils face off in a zany sequence of challenges--and readers get to guess the outcome of all the wacky stunts. The winner gets a Golden Banana! Readers will be laughing, cheering, and giving themselves a round of applause as they play the game over and over again. Bob Shea, creator of many favorite funny books, including Unicorn Thinks He's Pretty Great and the Ballet Cat series, provides endless storytime fun with high-energy audience participation.