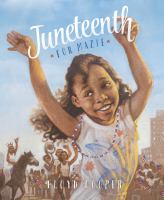 Little Mazie wants the freedom to stay up late, but her father explains what freedom really means in the story of Juneteenth, and how her ancestors celebrated their true freedom.

"I bet you're tired of hearing ‘no' all the time," her father says to grumpy Mazie. "Well, Great, Great, Great Grandpa Mose heard ‘no' even more." Mentioning "freedom" several times but "slavery" only in an endnote, Mazie's dad describes how people who "sweat, struggled, bled, and cried" burst into celebration when a proclamation from a "brave president" was read one June day. It wasn't the end of struggles, he explains, but Mazie will have a chance to celebrate that great day with barbecue and strawberry pop, "and to remember." In his customary gauzy gold-and-brown illustrations, Cooper sandwiches historical images of figures picking cotton, fleeing "north to freedom," and marching over a bridge, between contemporary scenes of Mazie snuggled up next to her dad, and dancing in a festive parade. One final view of her kneeling reverently precedes a brief afterword that fills in some blanks—though not mentioning that red food is actually a traditional part of the holiday. Other introductions to Juneteenth are more detailed, but this will give even young readers a glimmer of its significance. Copyright 2014 Booklist Reviews.

K-Gr 3—June 19, 2015 will mark the 150th anniversary of the day the Emancipation Proclamation made it to Texas (two years after the rest of the country heard it). This title offers context for that occasion, hailed as "Juneteenth." Cooper's signature oil wash and eraser technique elevates the presentation beyond the purely instructional. Like some of his predecessors who told this story (Valerie Wesley, Carol Boston Weatherford, etc.), this author frames the history of freedom in Texas with a present-day family's commemoration. Mazie is a young African American who bristles at age-related limits, such as cookie consumption and bedtime. Her father mentions that she will have a chance to celebrate tomorrow; explaining that her restrictions aren't so terrible, he says: "Well, Great, Great, Great Grandpa Mose heard 'no' even more." As he narrates, listeners see the profile of a boy in an endless cotton field, a man and woman running toward the North Star, the proclamation being read from a Texan balcony. Mazie's father covers ensuing civil rights' milestones, declaring, "Black people still struggled to stand shoulder to shoulder with White people." Cooper depicts the Selma to Montgomery March, a schoolroom, a church, and the rear view of a historic inauguration, making this a useful title for a bird's-eye perspective of the subject. For a treatment that focuses solely on that long ago day in Texas and imagines what the impact of the announcement would be on one slave family, see Angela Johnson's All Different Now (S. & S., 2014).—Wendy Lukehart, District of Columbia Public Library [Page 70]. (c) Copyright 2014. Library Journals LLC, a wholly owned subsidiary of Media Source, Inc. No redistribution permitted.

In remembrance of the celebration commemorating her ancestors' freedom from slavery, Mazie prepares to observe Juneteenth, in a beautifully illustrated story by an award-winning author/illustrator.

Little Mazie wants the freedom to stay up late, but her father explains what freedom really means in the story of Juneteenth, and how her ancestors celebrated their true freedom.

Mazie learns the history of Juneteenth and its importance through a story about her grandfather.