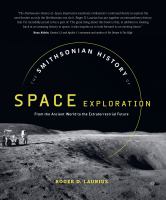 This oversize offering is a space nerd's dream come true. Appealing one- and two-page spreads address everything celestial, from ancient astronomers to sixteenth-century, dogma-changing scientific discoveries to rudimentary weapons and warfare, Sputnik, our current space age, and the future of exoplanetary exploration. The international, rounded coverage considers technology, of course (specifications, satellites, spacecrafts, suits, propulsion models, surface rovers, probes), plus social context: people, politics, international treaties, commercialization, tourism, triumphs and disasters, media coverage, books, movies, and those ever-popular alien conspiracy theories. Pages are laden with graphics, which include illustrations, reproductions, maps, archival photos, charts, graphs, and time lines, all accompanied by captions and credits. Fun for reading cover to cover or dipping into, the book is also set up in a logical, roughly chronological flow, which will assist with research. Whether used as a beginning point for research (no source notes, alas), a lure for browsers, or an irresistible read for fans of strange new worlds (to infinity and beyond!), this will make a handsome addition to popular-science collections. Copyright 2018 Booklist Reviews.

Launius, a prolific historian and author retired from both NASA and the National Air and Space Museum, provides a broad-brush survey of space travel and investigations through the years. Rocketry, spacecraft, and manned flight all receive detailed coverage. More countries have space programs now than most people realize; Launius does well in acquainting us with them. Throughout Smithsonian History, illustrations and remarks recall science fiction books and films that paralleled or preceded corresponding developments in spaceflight. The saga of failures and occasional brilliant successes in Mars missions is well covered. But some space science topics are inadequately treated or plagued with inaccuracies, such as the confusion of ICE, a NASA probe that visited Comet Halley, with IUE, an Earth-orbiting satellite that observed Halley's ultraviolet light from afar (p. 310). The section on the Hubble Space Telescope mentions the telescope's notorious early focus problem but not the less publicized yet even more serious flaw, a repetitive jitter that interfered with the spacecraft's ability to lock onto guide stars and track a target. (See the account by Neil deGrasse Tyson and Avis Lang, Accessory to War: The Unspoken Alliance between Astrophysics and the Military, 2018.) Summing Up: Recommended. With reservations. Undergraduates and general readers.--S. P. Maran, American Astronomical SocietyStephen P MaranAmerican Astronomical Society Stephen P Maran Choice Reviews 56:06 February 2019 Copyright 2019 American Library Association.

Launius (former associate director, Collections and Curatorial Affairs, Smithsonian Air and Space Museum) lends his expertise to this comprehensive history of space exploration. In the first chapter, the author briefly examines space discoveries from ancient times to the 1930s. In the remaining sections, he covers the period from World War II onward, when space exploration accelerated dramatically; in particular, technological advances in rocketry, which increased rapidly during the war, especially in Germany. After the conflict, Nazi scientists and equipment were captured by the Allies and then brought to both the United States and the Soviet Union resulting in the space race. This competition between the two superpowers led to advances such as the first satellite, the first manned space mission, and the moon landing. The author also examines the space programs of China, Japan, Great Britain, and elsewhere. He speculates about lunar tourism, humans on Mars, and the pursuit of interstellar space exploration. Furthermore, Launius recognizes the impact of space exploration on popular culture in sf books and movies. VERDICT A recommended introduction to space exploration, this readable history is further supplemented with sidebars, historical photographs, and charts.—Dave Pugl, Ela Area P.L., Lake Zurich, IL Copyright 2018 Library Journal.

The first in-depth, fully illustrated history of global space discovery and exploration from ancient times to the modern eraThe Smithsonian History of Space Exploration is a comprehensive history of international space exploration paired with photographs, illustrations, graphics, and sidebars on key scientific and technological developments, influential figures, and pioneering spacecraft. Former NASA and Smithsonian space curator and historian Roger D. Launius presents human's endeavors to understand the universe, honoring millennia of human curiosity, ingenuity, and achievement.The book examines space exploration's origins in the pioneering work undertaken by the ancients of Greece, Rome, and China, and moves through the great discoveries of Renaissance thinkers including Copernicus, Galileo, and Kepler. It offers new insight into well-known moments such as the launch of Sputnik 1 and the Apollo Moon landing and explores the unexpected events and hidden figures of space history.Presenting the technological and mechanical breakthroughs enabling humans to explore far beyond our own planet in recent decades, it also speculates on the future of space exploration, including space tourism and our possible future as an extraterrestrial species. This is a must-read for space buffs and everyone intrigued by the history and future of scientific discovery.