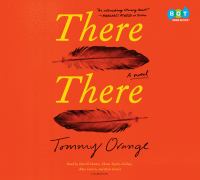 There there A novel

Twelve Native Americans came to the Big Oakland Powwow for different reasons. Jacquie Red Feather is newly sober and trying to make it back to the family she left behind in shame. Dene Oxedrene is pulling his life together after his uncle's death and has come to work the powwow and to honor his uncle's memory. Edwin Frank has come to find his true father. Bobby Big Medicine has come to drum the Grand Entry. Opal Viola Victoria Bear Shield has come to watch her nephew Orvil Red Feather;... Orvil has taught himself Indian dance through YouTube videos, and he has come to the powwow to dance in public for the very first time. Tony Loneman is a young Native American boy whose future seems destined to be as bleak as his past, and he has come to the Powwow with darker intentions--intentions that will destroy the lives of everyone in his path. Tommy Orange delivers a wondrous and shattering portrait of an America few of us have ever seen. A multi-generational, relentlessly paced story about violence and recovery, hope and loss, identity and power, dislocation and communion, and the beauty and despair woven into the history of a nation and its people.

Orange's debut novel introduces listeners to what appears at first glance to be an unrelated cast of characters residing in contemporary Oakland and sharing only their Native American ancestry. Their paths converge at the first Big Oakland Powwow as the thrum of shared experiences threads together the complicated plot. The ensemble cast of narrators does an impressive job of creating distinctive, emotionally resonant characterizations of all 12 protagonists, aided by chapter headings that signal changes in perspective. Interconnected subplots, featuring 3-D printed guns, VR drones, internet addiction, and documentary filmmaking, are riveting as individual set pieces but are mesmerizing as they slowly come together. Violence and deeply rooted grief saturate the writing and are performed with authenticity and grace by the cast of narrators. Of particular note are the voices of Cuervo as Jacquie Redfeather and Kyla Garcia as Jacquie's sister, Opal. A beautiful performance of a stunning new voice in fiction. Copyright 2019 Booklist Reviews.

"[B]eing able to understand where we came from, what happened to our people, and how to honor them by living right, by telling our stories" could be goals for any community—but the words are especially resonant for debut novelist Orange's sprawling Native American cast: "the world is made of stories, nothing else, just stories, and stories about stories." Most important, "we should never not tell our stories," a dying mother urges her daughter. Orange presents more than a dozen men, women, and children confronting broken families, socioeconomic entrapment, cultural erasure, and tenacious reclamation who initially seem to share little more than their Oakland setting. Their Native connections will link their stories as Orange—of Cheyenne and Arapaho tribes of Oklahoma—moves each toward the Big Oakland Powwow, an epic, explosive event that will both reunite and destroy. Narrator Darrell Dennis, Shaun Taylor-Corbett, Kyla García, and Alma Cuervo help to keep characters distinct; that all but Cuervo identity as Native American/First Nations undoubtedly enhances their nuanced performances. VERDICT While bearing witness to history (his piercing preface fiercely encapsulates a half-millennium of Native experiences), Orange commands urgent, immediate attention in this masterly montage of voices, lives, visions, tragedies, and dreams. ["A broad sweep of lives of Native American people in Oakland and beyond": LJ 4/1/18 starred review of the Knopf hc; a June LibraryReads pick.]—Terry Hong, Smithsonian BookDragon, Washington, DC Copyright 2018 Library Journal.

ONE OF THE 10 BEST BOOKS OF THE YEAR—THE NEW YORK TIMES BOOK REVIEWWINNER OF THE CENTER FOR FICTION FIRST NOVEL PRIZEOne of the Best Books of the Year: The Washington Post, NPR, Time, O, The Oprah Magazine, San Francisco Chronicle, Entertainment Weekly, The Boston Globe, GQ, The Dallas Morning News, Buzzfeed, BookPage, Publishers Weekly, Library Journal, Kirkus Reviews   NEW YORK TIMES BEST-SELLER Tommy Orange’s “groundbreaking, extraordinary” (The New York Times) There There is the “brilliant, propulsive” (People Magazine) story of twelve unforgettable characters, Urban Indians living in Oakland, California, who converge and collide on one fateful day. It’s “the year’s most galvanizing debut novel” (Entertainment Weekly).   As we learn the reasons that each person is attending the Big Oakland Powwow—some generous, some fearful, some joyful, some violent—momentum builds toward a shocking yet inevitable conclusion that changes everything. Jacquie Red Feather is newly sober and trying to make it back to the family she left behind in shame. Dene Oxendene is pulling his life back together after his uncle’s death and has come to work at the powwow to honor his uncle’s memory. Opal Viola Victoria Bear Shield has come to watch her nephew Orvil, who has taught himself traditional Indian dance through YouTube videos and will to perform in public for the very first time. There will be glorious communion, and a spectacle of sacred tradition and pageantry. And there will be sacrifice, and heroism, and loss.  There There is a wondrous and shattering portrait of an America few of us have ever seen. It’s “masterful . . . white-hot . . . devastating” (The Washington Post) at the same time as it is fierce, funny, suspenseful, thoroughly modern, and impossible to put down. Here is a voice we have never heard—a voice full of poetry and rage, exploding onto the page with urgency and force. Tommy Orange has written a stunning novel that grapples with a complex and painful history, with an inheritance of beauty and profound spirituality, and with a plague of addiction, abuse, and suicide. This is the book that everyone is talking about right now, and it’s destined to be a classic.