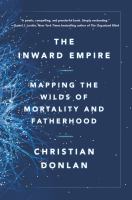 The inward empire Mapping the wilds of mortality and fatherhood

Diagnosed with multiple sclerosis shortly after his daughter's birth, the author compares the joy, heartbreak, and anxiety of his own neurological decline with his daughter's flourishing brain activity.

"My daughter took her first steps on the day I was diagnosed." Thirtysomething Donlan recounts his concurrent journeys through two realms—parenthood and patienthood—and unexpected synchronicities. He finds both roles unpredictable, identity altering, and transformative. Constant worry is barely counterbalanced by heightened hope for a safe, healthy future. His diagnosis is relapsing-remitting multiple sclerosis (the most common type of MS). The initial symptoms include difficulty using door handles, a pins-and-needles feeling in his fingers, and dropping things. Over time, speech becomes clumsy, fatigue grows, and double vision occurs. He is informed that 10 different treatment options exist for his MS but none are curative. Donlan chooses the safest medication but eventually receives the riskiest drug, which must be administered intravenously in the hospital. Mentions and accounts of Phillip K. Dick, Iceland's patron saint, Thorlak Thorhallsson, Oliver Sacks, Phineas Gage (who survived impalement by by an iron rod through his brain), Imhotep, and physician Jean-Martin Charcot pop up in Donlan's illness memoir. An emotional and unlikely fusion of new fatherhood and life as a neurological patient. Copyright 2018 Booklist Reviews.

A candid search for identity leads journalist Donlan to ask: Where do I stop, and where does the illness begin? Shortly after the birth of his daughter, Donlan felt like a tourist in his own skin as he experienced fatigue, brain fog, and tingling sensations, among other symptoms. He describes multiple sclerosis as two diagnoses at once: a condition, and an incurable one. To better understand a condition that can be difficult to describe, he interviews neuroscientists and researches the work of pioneering French neurologist Jean-Martin Charcot. With his concept of self in flux, Donlan struggles with self-discovery, becoming his own inner explorer while trying not to become an amateur neurologist. The author shines when portraying his family, siblings, and parents, and his efforts to keep them away out of self-preservation. His hospital diaries display the conflicting emotional and physical responses to pain: Am I overreacting or underreacting? For Donlan, both parenthood and multiple sclerosis are an adventure, and he often wonders about limitations and failure. VERDICT As one of the few books that touches upon the intersections of parenthood and chronic illness, it would be easy to recommend this affecting memoir to both communities; it should also find a home among readers of medical memoirs.—Stephanie Sendaula, Library Journal Copyright 2018 Library Journal.

In this earnest memoir, journalist and first-time author Donlan chronicles his efforts to "navigate the world" as his life changes in his 30s after two almost simultaneous events: the birth of his daughter and his diagnosis of multiple sclerosis. He combines careful and unsparing accounts of the "Inward Empire" of experiencing MS—"a place that I am transported to when the truly weird stuff starts to happen"—with short descriptions of MS, how it was first discovered in the 1860s as a "disease of cities and factories," and how it is currently treated. As he recounts trying to reconcile the "opposing sensations" that his MS onset has on his mental and emotional condition—"the fog of complete bewilderment, the toxic Zen of total comprehension"—he also carefully notes his daughter's development over the first few years of her life, as a "different person was emerging, outlined by her new abilities." But Donlan never forces the parallels between his life and his daughter's; the way his family, friends, and doctors deal with his neurological decline leads him to a greater understanding of his role as a person and a father: "to face death and acknowledge its power, and to acknowledge the equal power of life." This is a moving, gracefully written story. (June) Copyright 2018 Publishers Weekly.

A man who was diagnosed with multiple sclerosis shortly after his daughter was born, observes and compares with heartbreak, joy and anxiety his new baby's growing brain activity and his own neurological decline. 20,000 first printing

In the vein of The Noonday Demon and When Breath Becomes Air, a father's "remarkable and revelatory" account of navigating his own neurological decline while watching in wonder as his young daughter's brain activity blossoms, a stunning examination of neurology, loss, and the meaning of life. (The Sunday Times) Soon after his daughter Leontine is born, 36-year old Christian Donlan's world shifted an inch to the left. He started to miss door handles and light switches when reaching for them. He was suddenly unable to fasten the tiny buttons on his new daughter's clothes. These experiences were the early symptoms of multiple sclerosis, an incurable and degenerative neurological illness. As Leontine starts to investigate the world around her, Donlan too finds himself in a new environment, a "spook country" he calls the "Inward Empire," where reality starts to break down in bizarre, frightening, sometimes beautiful ways. Rather than turning away from this landscape, Donlan summons courage and curiosity and sets out to explore, a tourist in his own body. The result is this exquisitely observed, heartbreaking, and uplifting investigation into the history of neurology, the joys and anxieties of fatherhood, and what remains after everything we take for granted - including the functions that make us feel like ourselves - has been stripped away. Like Andrew Solomon, Paul Kalathini, and William Styron, Donlan brings meaning, grace, playfulness, and dignity to an experience that terrifies and confounds us all.