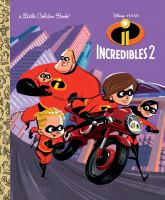 A range of books at various reading levels are publishing to coincide with the film release of the new Disney*Pixar sequel, The Incredibles 2, which brings back everyone’s favorite family of superheroes in an exciting, hilarious and heartfelt movie follow-up to the original blockbuster. Movie tie-in.