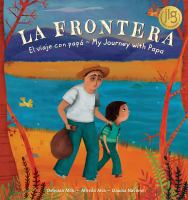 *Starred Review* Alfredo Alva and his family love their life in the Mexican village of La Ceja, where Papá and Abuelo gather pine nuts from trees and stack corn. When Abuelo can no longer help, Papá can't provide enough for the family. Abuelo tells Papá he must travel somewhere with better opportunities, and soon a man called Coyote comes to receive payment to help Papá, with Alfredo in tow, cross the Frontera—­the border—into Texas. After Alfredo and his papá cross the Rio Grande in an inner tube, they realize that Coyote has abandoned them, and so they begin the perilous journey on their own, walking for days, sleeping on rocks, and avoiding snakes and scorpions. When they finally arrive at their new home, Alfredo begins school, keeping to himself until a teacher facilitates him making friends and learning English. Four years later, the rest of Alfredo's family finally joins them. Alfredo's true story is conveyed in the calm, peaceful tone of a child and illustrated with distinctive, emotional images that show the brutal (but never overly frightening) struggles as well as the moments of happiness. So simple but so beautiful, the story depicts what many must go through when seeking a better life in America. Strong back matter includes a map and further details about Alfredo's journey, as well as info and photographs regarding immigration. Grades 2-4. Copyright 2018 Booklist Reviews.

Drawn from coauthor Alva's own immigration as a child, this bilingual picture book pairs Spanish and English text on each richly colored spread. In the Mexican state of Guanajuato, Alfredo learns that he will leave behind his mother and siblings and travel with his father to the U.S. to "find a place where work will be plentiful." The trip is perilous; after they're abandoned by a guide, they find their way across the dangerous landscape to Texas, where, after a stay in the so-called Embassy, a collection of discarded vehicles, they resettle, ultimately reuniting with their whole family. Precise details create a deeply moving sense of a young immigrant's journey, from the drinking water dropped along the tracks by train crews to a new school, where Alfredo always brings a $100 bill in case he's picked up and returned to the border. With bright, saturated colors and expressive figures, the illustrations echo both the story's drama and tenderness. Appended final spreads feature photos of Alva's real-life family along with additional notes about the Texas-Mexican border and immigration. Ages 8–12. (May) Copyright 2018 Publishers Weekly.

Gr 2–5—Alva, along with coauthor Mills, narrates his experiences as a young child crossing the Mexican and U.S. border with his father. Their journey is prompted by financial needs that force Alva and his father to sadly leave behind the rest of the family and travel north with the help of a coyote, a smuggler of people. At the Rio Grande, the coyote takes their money and abandons them. Together, the father and son find their own way to the embassy. After floating across the river, climbing a mountain, and trudging across a giant valley, they arrive at their destination only to discover that the embassy is nothing more than a broken-down campsite inhabited by other refugees. After a few short weeks, Alva is off to school in Texas, alone and scared. Learning a different language is confusing, but with the help of new friends, he learns English while helping them with their math. Alva and Mills make this bilingual autobiographical story readily accessible through well-written and vivid text. Though lengthy, the narrative never feels overwritten. Navarro's expressive acrylic, graphite, and digital collage illustrations provide a poignant and moving backdrop for this compelling first-person narrative. Back matter includes information on immigration, a history of the U.S. and Mexican border, and photos of Alva's family and hometown. VERDICT An authentic and humanizing perspective on immigration; a must-have for classrooms, libraries, and bilingual collections.—Mary Margaret Mercado, Pima County Public Library, Tucson, AZ Copyright 2018 School Library Journal.