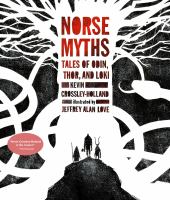 The gods of the Vikings come to life as never before in this extraordinary illustrated anthology by Carnegie Medal-winning author Kevin Crossley-Holland and artist Jeffrey Alan Love. Fast-moving and ice-bright, these dramatic, enthralling and atmospheric tales are based on the Scandinavian myth cycle - one of the greatest and most culturally significant stories in the world. The stories of dazzling magic and thrilling journeys tell of the creation of the nine worlds and follow Odin with his one ...eye, Thor with his mighty hammer and Loki the shape-shifting trickster on their adventures until the final great battle of Ragnarok. In this stunning collection of myths, the strange world of ancient magic, gods, giants and dwarfs is unforgettably imagined.