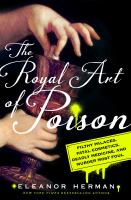 Traces the history of poison in centuries of royal courts, from the intentional posionings to the unintentional side effects of commonly used makeup and medications.

Murder and scandal always sell, and Herman applies this philosophy to her examination—and frequent exhumation—of history's dubiously dispatched royalty. Though these were toxic times for all, they are particularly fascinating when viewed through the lens of palatial luxury and excess, where a higher tier of poisons operated in the form of costly medicine, tonics, beauty aids, and fashionable attire and decor—arsenic green, anyone? This three-part, Eurocentric history opens with an eye-opening look at once-common precautions taken to protect royal families, which run the gamut from food tasters to unicorn horn poison detectors, though their horrendous hygiene didn't do them any favors. Lethal landscape established, Herman then profiles 20 potentially poisoned individuals; these include lesser-known persons, such as Agnes Sorel and Gabrielle d'Éstrees (both mistresses to kings), and famous figures, like Tycho Brahe, Mozart, and Napoleon. She concludes each profile with a contemporary postmortem and modern analysis of the death. A final section on modern-day poisonings shows this deadly tradition is alive and well. A pernicious history that will make jaws drop and pages fly. Copyright 2018 Booklist Reviews.

History is rife with tales of poison, as Herman (Sex with Kings, Sex with Queens) shows in her rip-roaring pop history of the role poison played in the royal courts of Western Europe. She includes expected tales of nobles using poison as a means of political gain; more surprising are the great lengths that royals went through to avoid such fate. Louis XIV maintained a strict safety protocol in his dining chamber, requiring servants to test everything from toothpicks to tablecloths for any potential poisonous threat. According to Herman, Louis was not alone in his paranoia. The irony is that many nobles were unwittingly poisoning themselves with their medical treatments and beauty regimens. After a bout of smallpox in 1562, Queen Elizabeth regularly applied a concoction of "lead ore, vinegar... arsenic, hydroxide, and carbonate" to her skin in a misguided attempt to improve her complexion. In the 17th century, the gravely ill Henry, Prince of Wales, was treated with the blood of a freshly killed bird; this was a common practice at the time, according to Herman, who adds that often doctors would leave bird carcasses on the patient's pillows for several days. By turns fascinating and stomach-churning, the book's detailed descriptions of different types of poisons will both shock and delight history buffs and enthusiasts of the macabre. (June) Copyright 2018 Publishers Weekly Annex.

Traces the history of poison in centuries of royal courts, from the intentional posionings to the unintentional side effects of commonly used makeup and medications.

This history of the role that poison has played in centuries of royal courts discusses both the intentional poisoning of royals by their underlings as well as the unintentional health effects of the makeup and medications they commonly used.

One of Washington Independent Review of Books' 50 Favorite Books of 2018 • A Buzzfeed Best Book of 2018"Morbidly witty." —Marilyn Stasio, The New York Times "A heady mix of erudite history and delicious gossip." —Aja Raden, author of StonedHugely entertaining, a work of pop history that traces the use of poison as a political—and cosmetic—tool in the royal courts of Western Europe from the Middle Ages to the Kremlin todayThe story of poison is the story of power. For centuries, royal families have feared the gut-roiling, vomit-inducing agony of a little something added to their food or wine by an enemy. To avoid poison, they depended on tasters, unicorn horns, and antidotes tested on condemned prisoners. Servants licked the royal family’s spoons, tried on their underpants and tested their chamber pots. Ironically, royals terrified of poison were unknowingly poisoning themselves daily with their cosmetics, medications, and filthy living conditions. Women wore makeup made with mercury and lead. Men rubbed turds on their bald spots. Physicians prescribed mercury enemas, arsenic skin cream, drinks of lead filings, and potions of human fat and skull, fresh from the executioner. The most gorgeous palaces were little better than filthy latrines. Gazing at gorgeous portraits of centuries past, we don’t see what lies beneath the royal robes and the stench of unwashed bodies; the lice feasting on private parts; and worms nesting in the intestines. In The Royal Art of Poison, Eleanor Herman combines her unique access to royal archives with cutting-edge forensic discoveries to tell the true story of Europe’s glittering palaces: one of medical bafflement, poisonous cosmetics, ever-present excrement, festering natural illness, and, sometimes, murder.