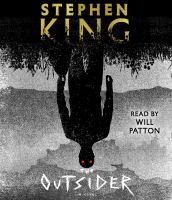 The outsider A novel

"An unspeakable crime. A confounding investigation...An eleven-year-old boy's violated corpse is found in a town park. Eyewitnesses and fingerprints point unmistakably to one of Flint City's most popular citizens. He is Terry Maitland, Little League coach, English teacher, husband, and father of two girls. Detective Ralph Anderson, whose son Maitland once coached, orders a quick and very public arrest. The case seems ironclad, especially when Anderson and the district attorney are... able to add DNA evidence to go with the fingerprints and witnesses. But Maitland has an alibi, and it turns out his story has incontrovertible evidence of its own. How can two opposing stories be true?"--Provided by publisher.

Terry Maitland, a pillar of his Flint City, Oklahoma, community, stands accused of committing murder and other vile acts upon a 10-year-old local boy. DNA evidence and multiple eyewitness statements lead police to believe this arrest is a sure thing. How is it possible, then, that fingerprints, video, and other eyewitness accounts also place him in another city and prove he couldn't have done it? Veteran narrator Patton overflows with energy, making an already compelling listen even more visceral. By changing his pace, Patton adeptly intensifies action and threat in the story, making the listen truly immersive. Patton's resonant and gravelly voice establishes that crime-novel feel, and he creates distinct voices and brings unique and appropriate characteristics to each. His choppy rhythm and tone for Holly, who sounds a bit robotic, is the only drawback. Readers sensitive to details of sexual crimes against children may want to steer clear, but fans of the Bill Hodges trilogy will appreciate some character crossover from those books. Copyright 2019 Booklist Reviews.

The skillfully rendered accents of Will Patton bring this dark whodunit to life with dramatic skill that nicely conveys mood and tone. King (Mr. Mercedes) combines a police procedural with elements of the supernatural. A young child has been brutally assaulted and murdered in Flint City, OK, and Det. Ralph Anderson is certain that the perpetrator is popular Little League coach and high school English teacher Terry Maitland. Anderson and several colleagues publicly arrest Maitland during a hotly contested baseball game. Then things start to unravel as Anderson learns that there is quite a bit of conflicting evidence. Several of Maitland's teacher colleagues can vouch that he was with them attending a convention at the time of the murder, which is further confirmed by video from a local news channel. VERDICT Recommended for King's myriad fans and for those wanting a mystery that's a bit outside the ordinary. ["King's fans may be dispirited by this latest disappointing thriller; however, his name alone will ensure it flies off the shelves": LJ 4/1/18 review of the Scribner hc.]—David Faucheux, Lafayette, LA Copyright 2018 Library Journal.

Reader Patton's steady, realistic narration adds a strong element of credibility to King's supernatural police procedural, in which a small-town detective is faced with an apparently impossible crime. The worst day in the life of Flint City, Okla., detective Ralph Anderson is when he arrests popular Little League baseball coach Terry Maitland for the murder of a young boy. The coach's fingerprints and DNA are all over the crime scene, but he has an ironclad alibi: he was at a convention in another city and has witnesses and even video footage to prove it. Subsequent events suggest the presence of an otherworldly serial killer whom Anderson and his associates set out to find and destroy. Joining them is Holly Gibney, a fascinating character from the author's Bill Hodges crime trilogy. Brilliantly deductive, neurotic, and obsessively determined, she quickly takes over the novel, and Patton provides her with an edgy, breathless, and impatient voice that, at times, is an almost crooning stream-of-consciousness. Patton's approach for Anderson and his other associates is more conventional: they speak in fittingly tough, hardboiled tones. As for the voice of the monstrous outsider, it is surprisingly conversational and educated, with just a hint of chilling playfulness. This audiobook demonstrates King's ability to make even the most fantastic story believable and poignant, and Patton's unswerving talent for making fiction feel real. A Scribner hardcover. (May) Copyright 2018 Publishers Weekly.

In the aftermath of a boy's brutal murder in Flint City, a local detective is forced to arrest a popular Little League coach who, in spite of an alibi, presents with open-and-shut evidence that is called into question when the suspect's true nature and the realities of the crime come to light. By the Edgar Award-winning author of 11/22/63. Simultaneous.

When a young boy's body is found in the town park, Detective Ralph Anderson finds the evidence and the witnesses all pointing to one of the city's most popular citizens.

Now an HBO limited series starring Ben Mendelsohn!'Evil has many faces'maybe even yours in this #1 New York Times bestseller from master storyteller Stephen King. An eleven-year-old boy's violated corpse is discovered in a town park. Eyewitnesses and fingerprints point unmistakably to one of Flint City's most popular citizens'terry Maitland, Little League coach, English teacher, husband, and father of two girls. Detective Ralph Anderson, whose son Maitland once coached, orders a quick and very public arrest. Maitland has an alibi, but Anderson and the district attorney soon have DNA evidence to go with the fingerprints and witnesses. Their case seems ironclad.As the investigation expands and horrifying details begin to emerge, King's story kicks into high gear, generating strong tension and almost unbearable suspense. Terry Maitland seems like a nice guy, but is he wearing another face? When the answer comes, it will shock you as only Stephen King can.