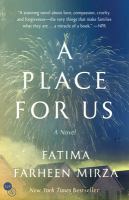 A place for us A novel

A story of family identity and belonging follows an Indian family through the marriage of their daughter, from the parents' arrival in the United States to the return of their estranged son.

Mirza's debut novel, extraordinary in its depth and diligence, is also the first title in the new SJP for Hogarth imprint, under the editorial direction of actor, producer, designer, and ALA Book Club Central's honorary chair, Sarah Jessica Parker. Mirza's slow-brewing, affecting, California-set tale portrays a splintered Muslim Indian family in which immigrant parents Layla and Rafiq try to maintain Islamic traditions. Their daughters are intent on pleasing their strict, religious father; Hadia becomes a doctor, Huda a teacher. But their son, Amar, is born rebellious. Hungry for life, poetic, wily, and charming, he breaks taboos, takes risks, and is ultimately betrayed by those closest to him. As Hadia's wedding triggers extended flashbacks while driving the story forward, Mirza adeptly revisits painful dilemmas from each narrator's perspective, revealing jolting secrets. Each complex, surprising character struggles with faith, responsibility, racism, fear, longing, and jealousy, while Mirza conveys with graceful specificity the rhythms of Muslim life, from prayer to wearing hijab, gender etiquette, food, holidays, and values, all of which illuminate universal quandaries about family, self, culture, beliefs, and generational change. Copyright 2018 Booklist Reviews.

Mirza's first novel, which launches Sarah Jessica Parker's new imprint with Hogarth, follows an American Muslim family in California, and in particular the divergent paths of eldest daughter, Hadia, and youngest child, Amar. Hadia excels in academics and is in most ways "the perfect daughter," but as she reaches adulthood, she forges her own path, pursuing a career in medicine rather than accepting marriage proposals. Amar struggles throughout his life, particularly with his faith. His inability to be the son his father expects leads him to alcohol, drugs, and estrangement. The majority of the story is told nonchronologically from the perspectives of Hadia, Amar, and their mother, Layla. The final section, the only part told in first person, is narrated by the father, Rafiq, and is an extremely moving meditation on parental love for a difficult child. Throughout, Mirza subtly poses the question: "What does it mean to be a Muslim in 21st-century America?" VERDICT Because of the structure, the time line of events is at times confusing. What Mirza does best is show how family dynamics can shape one's life and how seemingly inconsequential events can have a large impact over time. [See Prepub Alert, 1/8/18.]—Christine DeZelar-Tiedman, Univ. of Minnesota Libs., Minneapolis Copyright 2018 Library Journal.

Hadia is marrying for love, not tradition, and the story of her California-based Indian Muslim family unfolds on the eve of her wedding from the varied perspectives of mother, father, and three siblings. From a debuting Iowa Writers' Workshop grad, this is the inaugural acquisition in Sarah Jessica Parker's new imprint. Copyright 2018 Library Journal.

Bonds of faith and family strengthen and strangle in this promising but flawed debut, set in a close-knit Indian Muslim community in California. The story opens with the wedding of Hadia, golden child of Layla and Rafiq and older sister to Huda and Amar, skillfully setting up the central tension: why has Amar, the troubled youngest, been absent from the family, and can he be drawn back? The plot then shuffles backward and forward, revisiting plot points with few signposts to let the reader know when exactly key events—an untimely death, the snuffing out of a forbidden relationship, a family-rupturing fight—take place. Perspective alights on various characters, revealing more about some than others; middle child Huda remains nearly opaque, and early references to Rafiq's violent temper are all but dropped. For the final 80 pages, Rafiq narrates, and the story at last coheres. He delivers a heartrending reflection on his role in his son's partly self-imposed banishment: "It is in these moments that the fabric of my life reveals itself to be an illusion: thinking that I am fine, we all are, that we could grow around your loss like a tree that bends around a barrier or wound." Mirza displays a particular talent for rendering her characters' innermost emotional lives, signaling a writer to watch. (June) Copyright 2018 Publishers Weekly.

Layla and Rafiq are traditional Muslim Indians. After their arranged marriage in Hyderabad, young Layla joins Rafiq in northern California, where they immerse themselves in their mosque and its community and start their family. They do their utmost to raise their children in strict adherence to their faith. Mirza writes eloquently about the parents' choices and their children's subsequent struggles to straddle two cultures and assimilate. Daughters Hadia and Huda navigate life with Islamic constrictions much more successfully than their younger brother Amar. For Amar, there are too many contradictions, and from early childhood, he questions and rebels. In turn, his parents ramp up their restrictions and their disapproval, creating a downward spiral for Amar as the family is slowly but surely torn apart by cultural conflicts and misunderstandings. Teen readers will appreciate Hadia and Huda and will empathize, commiserate, and identify with the beleaguered Amar. Written alternately from each character's perspective, the narrative moves back and forth in time (sometimes confusingly), with Hadia's wedding the anchoring event. The writing is delicate, evocative, and intense but accessible. VERDICT Teens who enjoy powerful family dramas such as Mitali Perkins's You Bring the Distant Near and rebellion stories like Erika L. Sanchez's I Am Not Your Perfect Mexican Daughter will love this gripping and bittersweet tale.—Gretchen Crowley, formerly at Alexandria City Public Libraries, VA Copyright 2018 School Library Journal.

Named One of the Best Books of the Year: Washington Post • NPR • People • Refinery29 • Parade • BuzzFeed

“Mirza writes with a mercy that encompasses all things.”—Ron Charles, Washington Post

Hailed as “a book for our times” (Christiane Amanpour), A Place for Us is a deeply moving and resonant story of love, identity, and belonging.

As an Indian wedding gathers a family back together, parents Rafiq and Layla must reckon with the choices their children have made. There is Hadia: their headstrong, eldest daughter, whose marriage is a match of love and not tradition. Huda, the middle child, determined to follow in her sister’s footsteps. And lastly, their estranged son, Amar, who returns to the family fold for the first time in three years to take his place as brother of the bride. What secrets and betrayals have caused this close-knit family to fracture? Can Amar find his way back to the people who know and love him best?

A Place for Us takes us back to the beginning of this family’s life: from the bonds that bring them together, to the differences that pull them apart. All the joy and struggle of family life is here, from Rafiq and Layla’s own arrival in America from India, to the years in which their children—each in their own way—tread between two cultures, seeking to find their place in the world, as well as a path home.

A Place for Us is a book for our times: an astonishingly tender-hearted novel of identity and belonging, and a resonant portrait of what it means to be an American family today. It announces Fatima Farheen Mirza as a major new literary talent.