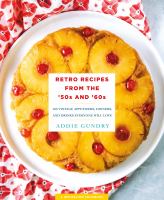 Retro recipes from the '50s and '60s 103 vintage appetizers, dinners, and drinks everyone will love

Remember Beef Wellington, and Grasshopper pie? Post-war rationing, Julia Child, and fondue parties? Gundry allows you to indulge your nostalgia, while she updates many of the recipes for todays sensibilities. Whether you've just seen them on TV shows, or remember them from your own childhood, here's your chance to reminisce with recipes from the 1950s and 60s.

It takes a genuine senior citizen to recall popular foods from the 1950s and '60s. But baby boomers' offspring no doubt will have relished many of the recipes Gundry has collected. As she points out, these decades witnessed the growing ubiquity of refrigeration in American homes, along with freezers that held more than just a couple of ice-cube trays. Thus arose Jell-O salads in all their guises and flamboyant hues, just in time for promotion in the pages of weekly magazines and on color televisions. Stay-at-home housewives also deserted kitchens for outside jobs. Ease of food preparation became ever more imperative, and the casserole became indispensable. Today's eaters may bristle at the amounts of sugar here, especially in "salads" concocted from marshmallows and artificial topping. Most recipes are a breeze to concoct from pantry staples, but even Gundry's simplified beef Wellington has its place for celebratory dinners. Copyright 2018 Booklist Reviews.

Gundry, a Food Network Cutthroat Kitchen winner and executive producer of RecipeLion, a food website, adds to her 103 Recipes series (Everyday Dinner Ideas, etc.) with this lackluster book. This collection of popular recipes from the 1950s and '60s contains what you might expect to find in a cookbook from the time or written on weathered index cards in grandma's recipe box. Recipes include easy beef stroganoff and a turkey tetrazzini. A book about this era couldn't overlook cocktail-party fare, and Gundry includes several options, among them a party cheese ball, crab puffs, and cream-cheese-stuffed celery. The featured desserts could only come from midcentury America, and include a creamsicle Jell-O mold, magic tomato soup cupcakes, and Harvey Wallbanger cake. There are also recipes for sweets still popular today, such as crispy rice treats, grasshopper pie, and classic peanut-butter cookies. The recipes are not always diligently researched: for example, beef Wellington rose to popularity in the 1960s, not the 1950s, and most likely thanks to Julia Child and not President Nixon (although he was famous for serving beef Wellington at nearly every state dinner he held during his presidency). Nevertheless, Gundry has made it easy for theme-party planners to find the necessary recipes all in one place. (Jan.) Copyright 2017 Publishers Weekly.

In a full-color book with a photo for every recipe, the star of Cutthroat Kitchen puts a modern twist on nostalgic recipes from the Mad Men era, giving these classic dishes the rediscovery they are due. Original.

In Retro Recipes from the ‘50s and ‘60s, Cutthroat Kitchen star Addie Gundry serves up nostalgic recipes from the Mad Men era, like Beef Wellington and Grasshopper Pie. Post-war rationing became a distant memory, and the rise of home entertainment culture made for prettier, more complex food. With French influence from Julia Child, and elegant aspirational figures like Jacqueline Kennedy, suburban dinner parties went glam. Backyard barbecues, fondues gathering everyone around a table, and not to mention cocktail parties were booming. From 1950's casseroles and hors d'oevres to more modern, adventurous dishes, there's plenty to celebrate and embrace! Each recipe is paired with a full-color, full-bleed finished dish photo.