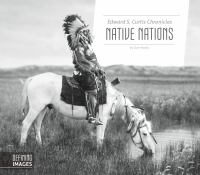 Discusses Curtis's early life, how he first became interested in documenting Native American life, the pioneering photographs he took, and his legacy.

*Starred Review* For 30 years, renowned photographer Curtis toured North America photographing Native American tribes and recording as much as he could about their culture, beliefs, and traditions, all of which he eventually compiled into a 20-volume work. This entry in the Defining Images series highlights Curtis' life and his monumental undertaking, but it also offers some modern perspectives and critiques of his work from contemporary scholars, many of whom are Native American. Nardo portrays Curtis as a well-meaning man, who genuinely believed he was chronicling dying cultures and made great personal sacrifices in completing his project. The contemporary perspective, however, is truly illuminating, addressing what Curtis got wrong; the hypocritical attitudes of Curtis' contemporaries, who idealized Native culture while simultaneously enacting policies that laid waste to Native lands and traditions; and how Curtis' stunning but highly romanticized images have continued to produce misrepresentations of Native American groups. Other modern scholars, though, admire Curtis' tenacity and sheer artistry, and the latter is nicely on display in the large-format reproductions of his original photos. A well-balanced, highly informative take on a lesser-known American icon. Copyright 2017 Booklist Reviews.

Gr 6 Up—The stories of those involved in some of the most prominent photographs in U.S. history. Edward S. Curtis spent his career perpetuating stereotypes when he depicted Native Americans, Matthew Brady recorded the Civil War, astronauts took pictures from space, and Ellis Island workers photographed immigrants. The histories are matter-of-fact and comprehensive, and the featured photographers are realistically portrayed. Brady suffered money problems, and Williams was not even the photographer at Ellis Island but its controversial director. NASA Takes Photography into Space differs from the others in that the focus is on technological challenges. While the topics are intriguing, the narrative is dull and much of the content is available elsewhere. The pictures are reproduced well, but there are too few. VERDICT Uninteresting narratives makes these a secondary purchase at best. Copyright 2017 School Library Journal.