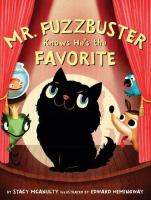 Longtime pet cat Mr. Fuzzbuster knows that he is Lily's favorite, but with four new animals in the house, Mr. Fuzzbuster decides to show everyone who his young owner loves best.

Probably every child with one or more siblings wonders at some point who, exactly, is the favorite in the family. This story puts the mystery into pet terms. In a household with one cat, one goldfish, one parrot, one king lizard, and one dog, who does their owner, a girl named Lily, like the best? The cat, Mr. Fuzzbuster, knows he's Lily's favorite; after all, he's been with Lily "since he fit in a teacup and she fit in diapers." But four other animals have since joined the menagerie. A riotous double-page spread shows a stage on which each animal declares that it is Lily's favorite. Mr. Fuzzbuster observes Lily closely, and suspense builds as she says to each creature, "You're my favorite . . ." But favorite what? The ensuing page-turns reveal quick thinking on Lily's part so that none of her pets feels underappreciated. The boisterous illustrations, rendered in pencil, ink, and digital media, offer a dramatic accompaniment to the story, while the ending gives readers a nice expectation upset. Copyright 2016 Booklist Reviews.

McAnulty (Beautiful) puts a high-spirited spin on kids' fascination with favorites in a story starring Mr. Fuzzbuster, a cat determined to stake his claim as his owner's most beloved pet. The two have been inseparable ever "since he fit in a teacup and she fit in diapers," but the cat has competition for her attention and affection, now that a goldfish, bird, lizard, and dog have joined the household. Determined to settle matters, Mr. Fuzzbuster writes Lily a note ("Dear Lily, Who is your favorite? Please decide"), after which she tactfully reassures each animal that it is her favorite—of its species. Working in a mix of digital and traditional media, Hemingway (Field Guide to the Grumpasaurus) makes the most of a fairly scant plot, capturing the black cat's seesawing emotions through big, blue eyes that reflect his smugness, trepidation, and elation. A closing zinger—is it possible that Lily's "favorite" isn't a pet at all?—suggests that Mr. Fuzzbuster's need to be #1 remains undiminished. Ages 3–7. Author's agent: Lori Kilkelly, Rodeen Literary Management. Illustrator's agent: Paul Rodeen, Rodeen Literary Management. (Feb.) Copyright 2016 Publisher Weekly.

PreS-Gr 1—Mr. Fuzzbuster, a most lovely cat, is Lily's favorite. He knows he is, because "they'd been together since he fit in a teacup and she fit in diapers." Unfortunately, he now has competition—Fishy Face (a fish), King (a lizard), Feathers (a bird), and Bruiser (a most ferocious canine barker) all believe that they are her favorite, and Mr. Fuzzbuster is out to prove that he is her top choice by asking her directly in a personal note. Text repetition creates a pattern easily followed by young readers as Lily speaks to her pets by name and selects each as her favorite (i.e., her favorite fish, her favorite lizard, her favorite bird, and her favorite dog). In the digital art, the large eyes of her animal friends draw readers' attention in focused close-ups or rooms of streaming sunlight, and varied fonts emphasize text. A suggested general purchase for all libraries, this book speaks to the close relationships in families (and between pets). The one truth everyone can agree on is that Lily is everyone's favorite. VERDICT A fair addition for storytimes and family reads.—Mary Elam, Learning Media Services, Plano ISD, TX. Copyright 2016 School Library Journal.

Mr. Fuzzbuster knew he was Lily's favorite. They did everything together. Naps. Story time. Walks. And more naps. But now four more animals lived in the house.'To prove he's still Lily's favorite, Mr. Fuzzbuster will have to ask her, but will her answer surprise him? This funny, heartwarming story is for every child who has ever wondered if there's a favorite in the house.